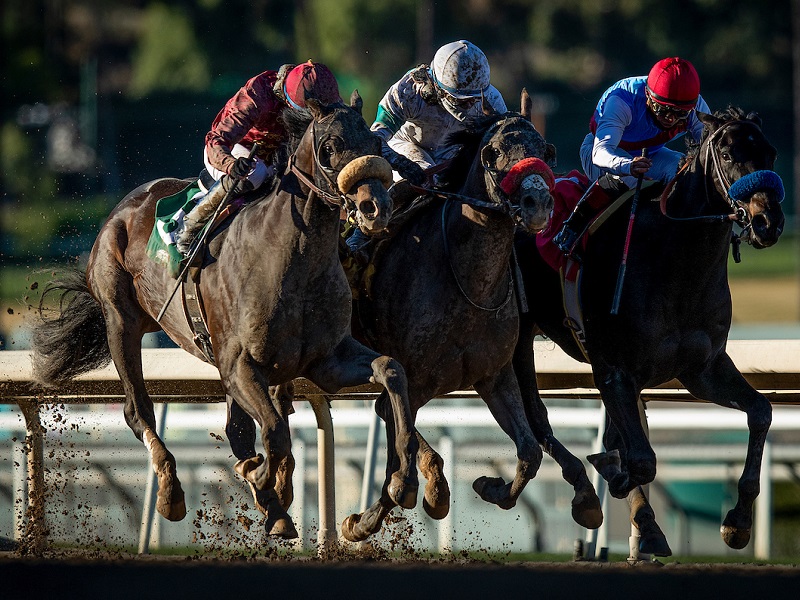 Saturday’s Grade 1 $750,000 RUNHAPPY Santa Anita Derby attracted a field of 10 as entries were drawn today for the west coast’s premier Triple Crown prep. Medina Spirit, winner of the Bob Lewis Memorial Stakes and runner-up in the San Felipe, drew post 7. He’ll carry the baton for the Bob Baffert stable in the absence of unbeaten San Felipe winner Life is Good, who recently underwent ankle surgery and will miss the spring classics.

Xpressbet and 1/ST BET will offer wagering and live streaming on the big RUNHAPPY Santa Anita Derby Day card, which features a mandatory payout in the Rainbow 6 jackpot pool, which could exceed $5 million. With Xpressbet & 1/ST BET, horseplayers can enjoy a $20 Money-Back Special if their RUNHAPPY Santa Anita Derby win bet finishes second or third. Visit Xpressbet.com and the 1/ST BET app for details.

Medina Spirit went wire-to-wire in the Lewis, but conceded the lead to the faster Life is Good last time out. He could be back on the engine Saturday in a race that lacks serious early pace. Baffert’s quest for a record-padding 10th Santa Anita Derby victory, which also includes last-out maiden winner Defunded (post 10), does come with challenges both new and old.

As for the new faces to the RUNHAPPY Santa Anita Derby trail, undefeated Rock Your World (post 3) has impressed in two starts on turf and will try the dirt for the first time under the tutelage of John Sadler, who won his only Santa Anita Derby in 2010 with Sidney’s Candy. He has tactical early speed and should not be far off the pace if he handles the dirt. Hall of Fame trainer Steve Asmussen sends late-running Oaklawn maiden winner Ottothelegend (post 6) west for a class test as the field’s lone ship-in competitor.

The RUNHAPPY Santa Anita Derby is one of 6 stakes on the big card in Arcadia, which welcomes fans back in limited attendance for the first time in more than a year. No walkup ticket sales will be available; all seating must be purchased in advance. The card also features the Santa Anita Oaks, a pair of turf stakes, and a pair of stakes for the California-breds. First race post time will be 3:00PM ET.