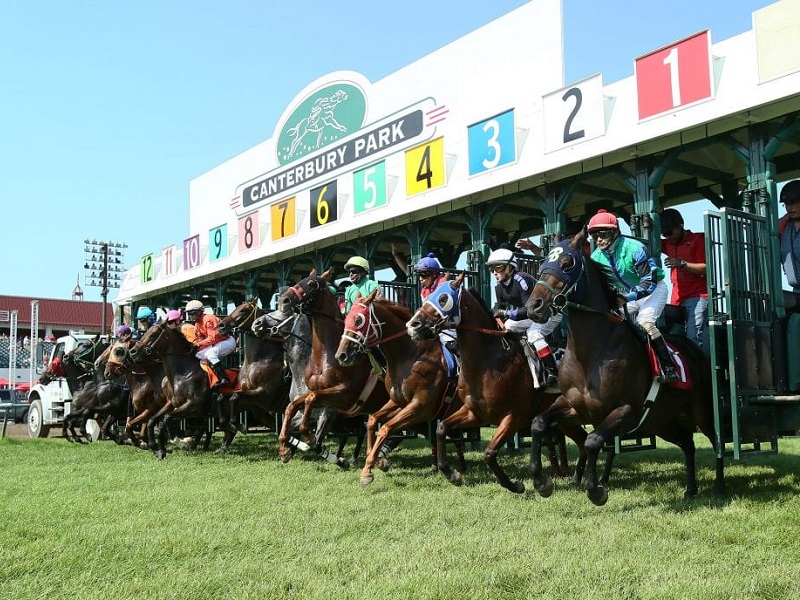 Canterbury Park in Minnesota opened its 2021 season Tuesday night, and no one solved the 10% Takeout Pick 5. That’s resulted in a $91,333 carryover into Wednesday night’s sequence, which runs Races 5-9.

If you’re not a regular follower of Canterbury Park, the 1/ST BET app can help you bridge the handicapping gap with a data-driven process.

The Wednesday card begins at 6:10 pm ET and the pick five starts at approximately 8:10 pm ET.

Jeremy Plonk’s Comments: The 32% win projection for Drop of Golden Sun, a 2-time stakes winner at Canterbury in 2020, is highest of any pick five race tonight. The 13-point spread between the top two choices is second-largest in the sequence. Hot Shot Kid has won this stakes race in 2019 and 2020 (and was second in 2018). Mr. Jagermeister was second in this race last year as the 1-9 favorite. Fireman Oscar goes for a David Van Winkle barn that went 2-for-3 opening night and Tampa shippers came out firing to start the meet.

Jeremy Plonk’s Comments: The 28% win projection is second-highest among the pick five races. Drama Chorus goes for a Tim Padilla barn that went 6: 2-1-1 opening night and hot-riding Alonso Quinonez. He’s the horse to beat, but has been second 4 times in 10 maiden tries. Fallen Empire adds blinkers and goes for a David Van Winkle barn that went 2-for-3 opening night, and the Tampa shippers have had immediate success here. He could be a price horse to watch. First-time starter Well Read is under-supported by the algorithm due to lack of data, but trainer Mac Robertson far and away leads local trainers in debut wins at this meet in recent years.

Jeremy Plonk’s Comments: North of Eden’s trainer Miguel Silva had 2 starters opening night, a 6-1 winner and 45-1 shot that finished third. This is his only starter today. Given the even win projections below the top pick, this could be a good place to take a bold stand and single, otherwise the ticket jumps 4 times in price to use all 4. Housemaker (15-1 ML) goes for a David Van Winkle barn that went 2-for-3 opening night and the Turf Paradise crew did very well here Wednesday.

Jeremy Plonk’s Comments: One of the tighter races, according to 1/ST BET, though still a solid 24% win projection and 10-point spread for Knight’s Honor – especially with the second choice on the also-eligible list and drawn widest if in. At 15-1 in the morning line, Knight’s Honor would be an awfully gutsy lean. Look for some extra protection. Molly’s Angel goes for a Tim Padilla barn that went 6: 2-1-1 opening night.

Jeremy Plonk’s Comments: The 15-point spread between the top two choices is the widest among the pick five races. Minnesota Miracle is a juicy 12-1 price while making his first start of the year, as is Twoko Bay, a local stakes-placed runner who should fit nicely here on class. Candy Cove goes for a Tim Padilla barn that went 6: 2-1-1 opening night.