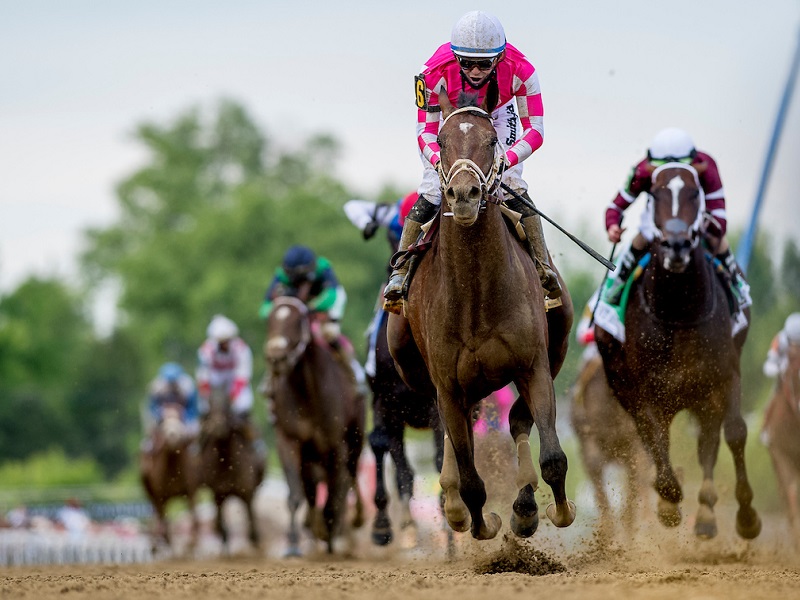 First things first…Congratulations to Rombauer, winner of the 2021 Preakness Stakes, which fittingly returned to its intended calendar position on the third Saturday in May. Weekend weather cooperated magnificently to deliver a pair of spectacularly clear and cool spring Black-Eyed Susan/Preakness afternoons. Fast and firm course conditions, a rarity for the Baltimore-based non-Camden Yards double-header, kept overflow fields intact and competitive.

Winner and connections deserve all credit. Rombauer showed more speed than usual under talented jockey Flavien Prat, held position throughout the race without being taxed, moved into contention on the final turn and roared by foes in the lane, coming home in ‘racehorse’ time. Trainer Michael McCarthy, by all accounts and personal experience, is a fine trainer and family man who wears emotions on his sleeve. McCarthy hails from the Todd Pletcher training tree, newest to bear Classic-winning fruit directly on the heels of Pletcher’s first-ballot acceptance into racing’s Hall of Fame. Long time owners/breeders John and Diane Fradkin showed patience with the colt and got lucky, both prerequisites to winning the big ones. They had wanted to sell the colt at two but scrapped those plans when advised of an anticipated COVID depressed market.

Despite a somewhat misdirected social media attempt to boycott Preakness wagering, all-time records were set. COVID-restricted limited attendance gave the event a uniquely weird-but-comfortable-feel. ‘Weird’ because the event, at less than 10 times the usual number of attendees, felt empty and ‘comfortable’ because the old warhorse that is Pimlico managed well under the much lighter than usual load.

The 146th Preakness Stakes had as tumultuous a buildup as any in the race’s history. And Preakness history includes plenty of tumult. The race boasts a Tiffany-designed trophy touted as the most valuable in all of sport and valued at $4 million. During the Civil War the trophy was buried beneath the ground to keep it from being melted into shot. Each year, white-gloved Maryland National Guardsmen parade the gem to the infield for ceremonious presentation to winning owners.

As everyone now knows, Kentucky Derby winner Medina Spirit’s original post-race blood test revealed the presence of a legal, therapeutic but unpermitted race day drug in Medina Spirit’s system. The horse’s connections are in the process of having a split sample tested and, along with the rest of the world, await results. Oddsmakers say the split sample results will match the original and that Medina Spirit will be disqualified from victory and trainer Bob Baffert will be suspended.

Baffert, who first announced the presumptive positive test in a press conference on the grounds of Churchill Downs the Sunday before Preakness, also made the rounds early Preakness week on assorted television news networks proclaiming an assortment of defenses, including an assertion that he had no idea how the drug had entered his horse’s system.

During Preakness week, a new theory emerged and was supported by the trainer, regarding pre-Derby application of an ointment containing the questionable substance to a stubborn Medina Springs’ skin rash.

As if that weren’t enough drama, Preakness officials, squeezed into an unprecedented legal and chronologic bind, hurriedly had Baffert’s planned Black-Eyed Susan and Preakness-day runners pre-tested in order to ascertain their suitability for race entry. They all passed, entered and performed on Friday and Saturday.

Concert Tour, one of two of Baffert’s Preakness runners, must have read about COVID crowd restrictions because he didn’t bother to show up. Oh, he was there physically, but not mentally or athletically. At least not so much that anyone who wagered on him could tell.

In the end, yours truly, who advised readers of this space to key Concert Tour in a few trifecta wagers, can’t blame the horse as much as himself. We mistakenly overvalued Concert Tour’s ability and incorrectly assumed he would display the usual Baffert-level speed and stamina, neither of which were evident in the colt’s performance. Out of the gate jockey Mike Smith expected to feel propulsion and instead got revulsion. And things got worse from there. He beat only overmatched Ram home.

We had a few correct observations in our pre-race Preakness evaluations, including going against the race favorite Medina Spirit, who finished third. We clearly were ‘for’ second and fourth-place runners Midnight Bourbon at 3-1 and Keepmeinmind at 14-1, respectively. Unfortunately, we suggested that winner Rombauer was a solid exotics play and did not predict his victory.

Below is a horse-by-horse review of Preakness. We’ve found that, when attempting to plan where you’re going, it often helps to assess where you’ve been. Included are number, horse name, trainer/jockey and finishing odds.

Where did all that wagering money on Ram come from? Fans of the NFL’s Saint Louis Rams? D. Wayne Lukas lovers? Random Access Memory addicts? Beats me. Based on past performances, this horse should have at least 30-1 and he was half that price. He broke well and enjoyed a rail-skimming trip into the first turn. From there his inadequacy became apparent and he finished last.

He was 14.50-1 on the toteboard and that’s about the price we expected. We also thought he had a puncher’s chance to win the race and a solid exotics opportunity. The latter came to fruition and help spark a $1,025.50 one-dollar superfecta payoff. To say that Keepmeinmind broke slowly would be an understatement. He walked out of the gate and spotted foes a significant head start. He’s not nearly talented enough to make up that kind of ground on quality horses. He rode the rail into the first turn while last, made a minor gain down the backside to pass one foe, moved closer on the far turn while inside and continued to close, too little, too late in a try that was similar to his Derby effort.

The Kentucky Derby winner (at this writing) closed as the 2.40-1 race favorite and broke well from the gate under jockey John Velazquez. He made the lead into the first turn, just like in the Derby, but this time he had company to his outside in #5 Midnight Bourbon, who dogged him the entire trip, finally taking over on the turn for home. Through the stretch Medina Spirit gave it all he had and that was third best on this day.

He started as the shortest priced of two Chad Brown runners in the race at 8.50-1. Both #3 Medina Spirit and #5 Midnight Bourbon outbroke him. He found a cozy rail spot into the first turn, just behind #3 Medina Spirit and #5 Midnight Bourbon. Down the backside, he began a move at the leaders just behind #7 France Go de Ina. The move was short lived, and he wasn’t able to muster anymore. He was passed by #2 Keepmeinmind in the stretch and checked in fifth.

Broke from the gate reasonably well (much better than in Kentucky Derby) and was in good early position under Irad Ortiz, Jr. just outside pacesetter #3 Medina Spirit. He hounded the Derby winner throughout the race and took the lead from him off the final turn. In the stretch, he battled #3 Medina Spirit into submission but wasn’t nearly strong enough to hold off Rombauer’s closing kick.

The winner of the 146th Preakness Stakes at a juicy 11.80-1 didn’t pop directly away from the gate but wasn’t away last, either. He didn’t figure to show early speed, but jockey Flavian Prat did a wonderful job of getting the colt into the race early without ‘sending’ him away from the gate. Around the first turn he was one off the rail, between #1 Ram on the inside and #9 Risk Taking on the outside, and about three lengths from the leaders. Down the backside, he moved forward into a position previously held by #7 France Go de Ina, between #4 Crowded Trade, inside, and #10 Concert Tour, outside. Into the far turn, he began to gain ground on the leading pair, leaving sidekicks behind. He was in full stride off the turn, reeling in the leaders. Through the stretch he leveled out and roared to the front with a commanding score in solid time.

He hopped in the air a bit at the start and didn’t figure to show any speed at 24.60-1. It was a way better start than he had last out in the UAE Derby. He was between horses early and just behind the leaders into the first turn. Down the backside, this colt made an early run at the leaders with his head cocked sideways. On the turn he couldn’t keep pace with the leaders as they drew clear and eventual winner #6 Rombauer left him behind.

Broke alertly from the gate at more than double his morning line at 13.70-1. He had no early speed and was in the rear early outside of #2 Keepmeinmind. Couldn’t keep up down the backside, as #2 Keepmeinmind left him alone in last. He mustered some late courage to pass four tuckered out runners to finish sixth.

No issues leaving the gate for the ‘other’ Chad Brown runner at 14.30-1. He was three-wide into the first turn in about eighth place, more than three lengths from the leaders. He never really roused himself and just went around the track to beat two home.

No excuse out of the gate for the ‘other Baffert’ and third choice at 3.70-1. He really didn’t show the kind of early speed we expected, and he was caught four-wide into the first turn. At this early point in the race, backers began rip mutuel tickets and they continued shredding throughout the remainder of the race. He never ran a step and checked in next to last.

Anyone looking forward to a full field and an interesting Belmont Stakes? Yeah, me too.