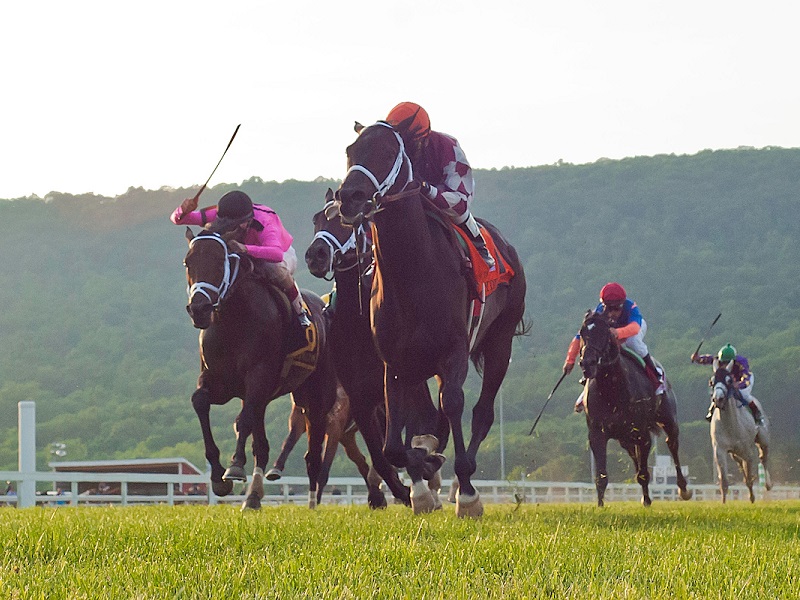 We’re excited for a massive Friday slate to take us into the Memorial Day weekend, including a $115K Pimlico Pick 5 carryover (Johnny D’s picks here), the 12% Takeout Stronach 5 (Frank Carulli’s picks here) and an All-Stakes Early Pick 4 at Penn National.

Not bad for a Friday afternoon and evening, huh?

Penn National’s All-Stakes (All-Turf) Pick 4 kicks off with Race 1, at 6:00PM ET, and is my focus. Rain is in the forecast for Friday, so keep an eye on turf conditions. I’m handicapping for a course with some potentially significant give in the ground.

The opener is a PA-bred stakes race for fillies and mares and it’s worth pointing out that the entrants would probably prefer this one come off the lawn. Of the seven runners, four have never won on the grass. #3 UJAYI (9/5) is the likely favorite on either surface, having finished second in the G3 Houston Ladies Classic in January.  Her dirt races are superior to those on turf, and if this comes off the lawn, she’ll be much more formidable. The same is true for #5 MIDNIGHT OBSESSION, who shined in a sloppy track race at Belmont in April. She has no turf form, but will be tough on the dirt. In the even this race stays on turf, #1 MOON CHANT (10/1) has lone-speed potential from the rail and could take this field a long way at a solid price.

A huge field is signed on here and, again, a lack of established turf form is apparent right off the bat. Of the 12 entrants, just five have had their picture taken in the winner’s circle after a grass race. My favorite of the turf horses is #4 MISSIN THE BIG DOG (8/1). He just won off a layoff at Pimlico and is a three-time winner on the lawn. #7 CHILLY IN CHARGE (4/1) and #10 SOMEDAY JONES (3/1) are circuit veterans, but they’re a combined 0-for-6 on turf. Plus, ML favorite SOMEDAY JONES has never shown an affinity for the surface and just got beat when in for a tag at Keeneland. Mike Maker did grab up this for $62,500 in December and you have to think these type of PA-bred races were what they had in mind, but he’s not a horse I’ll have on my ticket unless this race gets washed off.

If this race stays on the turf, #4 HONEY PANTS (7/5) is a single for me. She has been facing tougher horses in Florida and held her own against the likes of Con Lima and White Frost at Gulfstream. She now gets a field that is light on talent and the only real rivals on paper are #6 AMALFI PRINCESS (2/1) and #2 MIDNIGHT OBSESSION (4/1), who is cross-entered in Race 1. AMALFI PRINCESS is just 1-for-7, is 0-for-3 on turf and has never raced around two turns.  Her best race came when third in the G3 Beaumont behind a torrid pace.

Like the ‘Oaks, this race has two standouts on the ML, with #7 OUTADORE (8/5) and #3 ANNEX (9/5) being the primary conversation horses.  Unfortunately, Wesley Ward is reporting that OUTADORE, despite his proven form on soft turf courses, will scratch out of this spot to run in the ungraded $100,000 Paradise Creek at Belmont Park on Sunday. That leaves #3 ANNEX, who goes 'blinkers on' for Bill Mott. I'm not a huge believer in ANNEX, and his form has slipped since winning the Palm Beach Stakes at Gulfstream in February, but this field is light on turf form and class and he'll be tough to beat. As alternatives to the favorite, I present #6 SIBELIUS (10/1), who has a strong turf pedigree and just broke his maiden at Keeneland and #1 GERSHWIN (12/1), a son of G1 winner Music Note who has twice run in off-the-turf races.