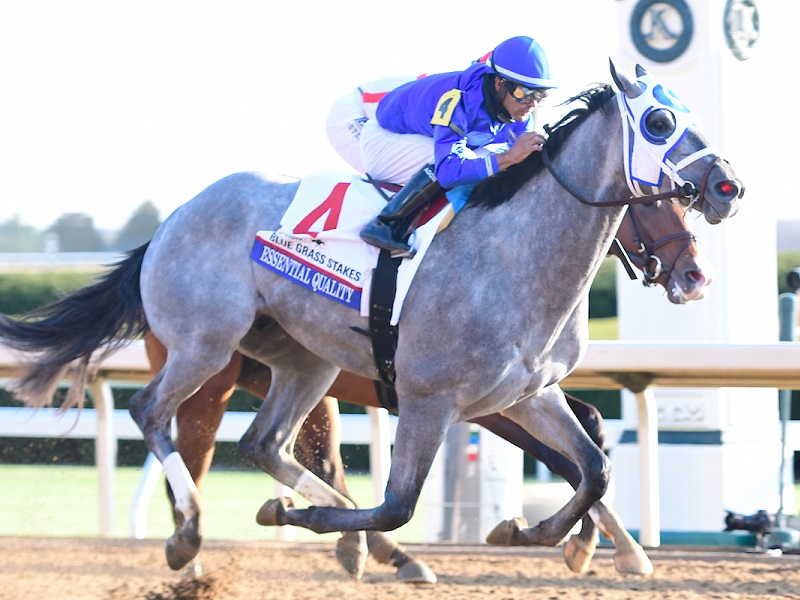 It is said that a journey of a thousand miles begins with a single step. That’s attributable to either Confucius, Lao Tzu or Dr. Phil. (My money’s on the good doctor’s nose.) At any rate, if you don’t subscribe to the adage, then you ought to contact either trainer John Sadler, jockey Joel Rosario or one of the Hronis brothers, all connections of Belmont starter Rock Your World. They’ll explain how it doesn’t matter if you’re going a thousand miles, the Derby distance of one mile and one-quarter or the Belmont journey of one mile and one-half, fortune begins and can end in a single step.

No runner in the 153rd presentation of the Belmont Stakes will complete the entire journey through all three Triple Crown events—Derby, Preakness and Belmont. Five of the eight Belmont horses ran in the Kentucky Derby and skipped Preakness. Two didn’t contest the Derby but ran in Preakness. One is trying his first Triple Crown race, having last raced in the Peter Pan. Why, this year, was no horse able to compete in all three legs? Different reasons. However, the absence of a perfect attendee, once again, has stimulated tired discussion that the Triple Crown series should be altered to accommodate a more fragile modern racehorse.

Hogwash! American Pharoah and Justify had no worries while recently sweeping the series. If time, circumstances and horse are right, a Triple Crown sweep is one of the most thrilling accomplishments in all of sports. It’s a special occasion; meant to celebrate a rare achievement.

For 37 years, no horse was able to win the Triple Crown. That’s a long time, but a special horse finally did it. One that moved smooth as silk and glided across the racetrack like he was running on air. Then another one did it. And he was special, too, in a different way. Speed, class, reliability. Both had it all.

In 2021, not only will no horse win the Triple Crown, no horse will even run in all three Triple Crown races. Fine. Who’s missing? Medina Spirit, the sullied Kentucky Derby winner, was fortunate to win that afternoon, helped immensely when Rock Your World, a serious early speed threat, was eliminated at the start. The Derby winner then returned to finish a tired third in the Preakness. Rombauer, surprisingly successful in Baltimore, is in the Belmont toting 126 pounds and a serious question regarding his ability to duplicate his Charm City conquest.

The ones that could make it Saturday are here and they’re capable, beginning with 2-year-old champ and Kentucky Derby favorite Essential Quality--a wide Derby trip and one length away from being unbeaten in six starts. Preakness winner Rombauer, Kentucky Derby third-place finisher Hot Rod Charlie and Derby second choice Rock Your World all will run. Trainer Todd Pletcher, going for his fourth Belmont Stakes triumph has three starters, including Florida Derby winner Known Agenda.

Triple Crown sweep aside, name another currently active sophomore you were excitedly looking forward to seeing race in the Belmont Stakes? It’s a fair collection of runners, an interesting handicapping puzzle and those that wager on the appropriate finishing combinations will be handsomely paid. Stop lamenting about who isn’t here and get to work figuring out in which order those that are here might finish.

After all, every day can’t be Christmas. (Double or nothing, that’s Doctor Phil’s line.)

Below is one man’s opinion of each horse entered in the Belmont Stakes, including post position, trainer/jockey and morning line odds. A suggested wagering strategy is also included.

He’s one of three in here trained by Todd Pletcher, who will enter the Hall of Fame on the first ballot this summer. Pletcher’s won this race three times before, so he knows what it takes to win. And, from where we sit, what it takes to win the Belmont is much more than what this fellow’s been able to previously produce. He has three wins—a maiden $50k claimer, an optional $50k/starter allowance and the slowest Wood Memorial in history. He would need to take a substantial jump forward to have a say in the outcome of this race.

The 2-year-old champ and failed Kentucky Derby favorite didn’t have a great journey in Louisville. He was bumped at the start and then jostled around. That forced him to go wide throughout the race and waste precious energy. He was unable to collect #4 Hot Rod Charlie through the lane for third place. This son of Tapit is quality and jockey Luis Saez will ask him to be closer to the pace this time around the oval. Two five furlong works, including a best-of-43, :59 2/5 over a ‘good’ Churchill surface should guarantee that he’s as fit and ready as top trainer Brad Cox can get him. Like in the Derby, he’s no cinch, but he can’t be ignored and is a worthy favorite.

No matter which speed figs one consults, the Preakness winner put it all together three weeks ago to run, by far, the best race of his young career. He’ll be asked to reproduce that effort in the Belmont to challenge for the win. It’s questionable whether or not he’ll be able to repeat such a strong effort so soon. At the short price of 3-1 he’s worth taking a stand against in the win slot and maybe worth boldly tossing from exotics, too. This son of Twirling Candy has made consistent, steady progress for trainer Michael McCarthy and that development led to the huge Preakness effort. But can the colt rebound quickly for his best again? It’s asking a lot. He loses the services of talented jockey Flavien Prat, who reunites with Derby mount #4 Hot Rod Charlie. Hall of Fame resident John Velazquez currently has a hot hand and is a more than capable replacement. This colt’s a closer, but he won’t be in another area code early in the race, so that helps. Based on the visual of how determined and dominant he was winning Preakness, it’s difficult to believe that he won’t run well in the Belmont, but that’s what the figs say, and, at the price, we’ll agree to go against him.

He’s got a legitimate shot at winning this race. He should be close to the early pace, much like he was in the Kentucky Derby when he finished third, beaten just one length. Jockey Flavien Prat, who rode #3 Rombauer to victory in Preakness, returns about this son of Oxbow, winner of the Louisiana Derby. The colt has had the usual roughly six weeks between races for trainer Doug O’Neill and he’s responded to the rest by finishing no worse than third in his last five races, beaten less than a total of two lengths, combined. It would be easy to assume he could move forward off his Derby effort and such an improvement puts him squarely in the Belmont win photo. His final work for this race as a solid 1:00 2/5 at Santa Anita, fifth best of 34, for a barn that doesn’t usually work them fast.

He did not run well in Preakness and had trouble before that in the Grade 2 UAE Derby when sixth, beaten more than 10 lengths. He won a maiden and an allowance race in Japan. He would need to do something extraordinary to move forward off his recent efforts. Don’t see it happening.

This son of Curlin has hinted that he has the firepower to win this race. His dominating Florida Derby victory shows he’s got the goods and slight improvement off that race fits well in here. Trainer Todd Pletcher has three starters in the race and that would give him a career total of 33-- the all-time mark for number of Belmont runners. Pletcher’s Belmont starters have done well, too--won three times, with six seconds and three thirds. Jockey Irad Ortiz, Jr. is sensational and he combines with Pletcher to win with roughly 28% of starts. Known Agenda’s final work in preparation for Belmont was a best-of-10, five-furlong blowout in 1:01 breezing. He enters Belmont off a ninth-place Derby finish where things didn’t go his way early in the race. He didn’t close a ton of ground late, but he didn’t lose any either. It was, as his trainer put it, “…a sneaky good race.” He will be closer early in the Belmont and connections would like to see someone push #7 Rock Your World along, insuring a legitimate pace. If that happens, this guy could grab more than a minor piece of the pie.

Much about how this Belmont Stakes concludes depends on how this Belmont Stakes begins. Early attention rests on the withers of Rock Your World and in the hands of Joel Rosario. If the duo leaves the gate alertly and races uncontested, the Candy Ride colt will be dangerous, especially, if he can negotiate the marathon distance in only a fourth career start and mere third on dirt. That tally includes his truncated Kentucky Derby debacle. Overall, that’s an experience deficit. Plus, the colt hasn’t had a meaningful race since April 3, when he soundly defeated eventual…current…and likely soon to be former Kentucky Derby winner Medina Spirit in the Santa Anita Derby. Rock Your World will take them as far as he’s able and that could be a long way, but it might not be all the way.

Blinkers will be added to the equipment of the third Todd Pletcher runner in the race. This son of Curlin has been worse than third just once in five starts and that was sprinting six furlongs first time out. He’s raced one mile and one-eighth three times and has a second and two thirds from those starts. His sole win came in a maiden race going one mile at Aqueduct. He’d really need to step up his game to have a big say in here but, if a few of the obvious ones don’t fire, he could hit the tri or super.