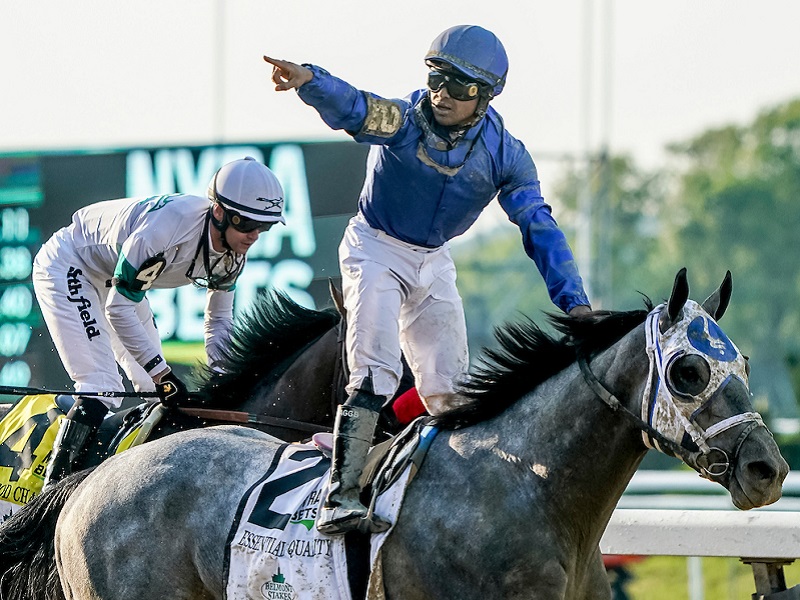 The two best 3-year-olds in the nation thundered through the Belmont stretch Saturday, once more proving the adage that the longer the race the more likely cream will rise to the top.

Essential Quality asserted superiority over classmates—for the sixth time in seven tries--his only defeat coming by a mere length in the Kentucky Derby after travelling wide for much of the way. Runner-up Hot Rod Charlie expended all in an effort that would have won so many other races that it’s nearly criminal. He set strong early fractions of :22 3/5, :46 2/5, 1:12 before being collared and grudgingly passed by Essential Quality. The pair was more than 11 lengths clear of a spent Rombauer, who was three-quarters of a length better than outgunned Known Agenda.

The wagering public was nearly spot on about the Belmont outcome—first five across the finish were five of the top six choices. Rock Your World, ranked third in wagering at 5-1, was the only outlier finishing in sixth place. The rest concluded matters exactly as the dinero had predicted—from winner and favorite Essential Quality, at 1.30-to-1 odds, to France Go de Ina, last as the longest shot in the field at 27-to-1.

Below is a horse-by-horse review of the Belmont Stakes. There really wasn’t much ‘trouble’ in the race to comment about, but it’s worth a detailed look at the final Triple Crown stanza in order to put a neat bow on this year’s series. Along with trip notes, we’ve included commentary on where each runner fits into the overall sophomore picture.

Remember, Derby, Preakness and Belmont competitors will fight again (Derby runner-up Mandaloun is in action Saturday at Monmouth), so it’s worth recalling how they fared in Louisville, Ky; Baltimore, MD, or Elmont, NY. In the coming months, new combatants will emerge; they always do, but, down the road, there’s nothing worse than missing out on cashing a ticket on a familiar face.

Thanks to those who have followed along this Triple Crown season, losing and, finally, winning a few bucks on our analysis and suggested plays. It’s been a blast and one of those ‘close-but-no-cigar’ experiences. During the second half of the racing season, we’ll continue to offer observations and horseplayer advice, so, as they say on TV, stay tuned!

Also, we’ll be blogging daily about the upcoming Ascot race meeting (June 15 through June 19) and you can find those observations in the Blogs section of the site.

Runners below are listed in post-position order with trainer, jockey, finish and off odds.

Not much was expected from this colt in the Belmont Stakes but, since he hails from the Todd Pletcher stable and had won the Wood Memorial, he took some play as third longest shot in the race at 14.70-1. As usual, out of the gate, had no speed and was last early. He saved ground on the rail near the back of the pack for the entire one mile and one-half journey and went evenly through the lane to pass a fading Rock Your World for fifth. He’s a real grinder and will need to find the perfect scenario, like he did in winning the slowest Wood renewal in history, to be successful again.

He didn’t break with the leaders and was hustled by jockey Saez to hold an early inside position in fifth. Into the first turn, Saez angled his mount one off the rail, in the clear, while still fifth. After about three quarters of a mile, down the backstretch, Saez gradually moved the favorite toward the leaders while four-wide. Around the far turn, France Go de Ina faded from between horses and Essential Quality, while three-wide joined pacesetters Hot Rod Charlies, inside, and Rock Your World. Turning into the stretch, only Hot Rod Charlie and Essential Quality remained, and they traded blows evenly until very late when Essential Quality drew clear to win by one and one-quarter lengths. It’s understandable why this horse hasn’t had the kind of fanfare that usually would accompany a 2-Year-Old Champion and previous winner of five of six starts. He’s just not flashy enough for most people’s tastes. He’s more workmanlike. Diligent. Relentless. He doesn’t have blistering early speed or a breathtaking closing charge. All he does is grab his lunch pail, head to work and do his job. He’s not one of the all-time greats, but he’s talented and reliable.

He broke alertly and established great early position inside and just behind a trio of leaders travelling at a fast clip. After about three-quarters of a mile, jockey John Velazquez permitted Rombauer to move closer to the leaders, in tandem with Essential Quality, who was moving forward on the outside. On the turn, about four lengths back, Rombauer was being asked by Velazquez to stay in touch with the leaders—Hot Rod Charlier (inside), Rock Your World (between) and Essential Quality (outside). Known Agenda also was ahead of him. Approaching the stretch, Rombauer shifted outside, around a tiring Rock Your World and inside Known Agenda. Through the lane, the leaders drew well clear, but Rombauer proved best over Known Agenda for third place. There’s little doubt that the quick turnaround from Preakness to Belmont was too much for Rombauer to reproduce his outstanding Baltimore effort. Given time to rest, he will be a horse to be reckoned with.

Some would argue that he ran the best race of all in the Belmont Stakes. Not surprising to this writer. Going in, we thought he had the best chance to upset the favorite. Out of the gate, jockey Flavien Prat hustled Hot Rod Charlie to the lead. He was flanked by France Go de Ina and Rock Your World. Into the first turn, and through a very fast early quarter-mile fraction of :22 3/5, Hot Rod Charlie bounced along on a pressured lead. Heading into the backstretch, Rock Your World was tugging somewhat at jockey Joel Rosario on Hot Rod Charlie’s flank. The half-mile fraction showed :46 2/5—considered by many at the time, possibly, too fast for either runner to survive. At the three-quarter marker, Hot Rod Charlie stopped the timer in 1:12 and was about to be joined by France Go de Ina and Essential Quality on the outside of Rock Your World. Into the far turn, jockey Prat glanced outside to see who was moving and spied the favorite closing in. However, the Frenchman never moved. He waited…and waited…before asking Hot Rod Charlie for everything. That request came as the pair entered the stretch. First, Prat scrubbed; then he shook reins; then he waved his stick before using it left-handed. The tank was empty. Hot Rod Charlie had, as they say, ‘run his eyeballs out’ and it wasn’t enough.

This is a very, very nice horse who’s been handled expertly by trainer Doug O’Neill--been ‘led over’ when ready and given appropriate rest along the way, too. He will be heard from again, for sure. Probably with Del Mar’s Pacific Classic as the next major target.

This guy really wasn’t ever good enough to compete against these foes. He broke well in the Belmont, showed more speed than was expected, sat in the garden spot down the backstretch, but just couldn’t keep up.

It appears as if he’s close, but just not good enough to reside among those at the top rung of this year’s soph division. A Florida Derby winner is nothing to ever sneeze at, but he just didn’t make another forward step after that outstanding performance. Perhaps he merely ‘got good’ at the right time, catching Greatest Honour on the downside and outfinishing an overmatched Soup and Sandwich. He was in a great position in the Belmont Stakes to make something happen but, when it counted, he couldn’t dent the leaders’ advantage or hold off Rombauer late. Trainer Pletcher knows what to do with this kind. He’ll give the colt a rest and, at about the time we’ve all forgotten about him, surprise in a juicy spot down the road.

This guy’s Santa Anita Derby victory over eventual Kentucky Derby winner Medina Spirit in his first dirt start after two turf triumphs may have been the best and worst thing to happen to him in his young career. The victory propelled him to a start in the Kentucky Derby where he broke slowly and was mauled from the gate. The SoCal success also emboldened connections to enter him in the Belmont Stakes, where he again left the gate a bit slowly, raced in contention for much of the way, challenged for the lead on the turn and finally, when the real running started, faded to sixth. In the end, it all seemed too much, too soon for Rock Your World. He requires a vacation and a chance to start anew, hopefully, with an opportunity away from the bright lights where he can begin to develop his obvious talent.

Not much to say about the colt we thought might be able to produce a closing run good enough to get a slice of the Tri or Super. He never threatened in this race. Forget Overtook, it was more like overmatched.