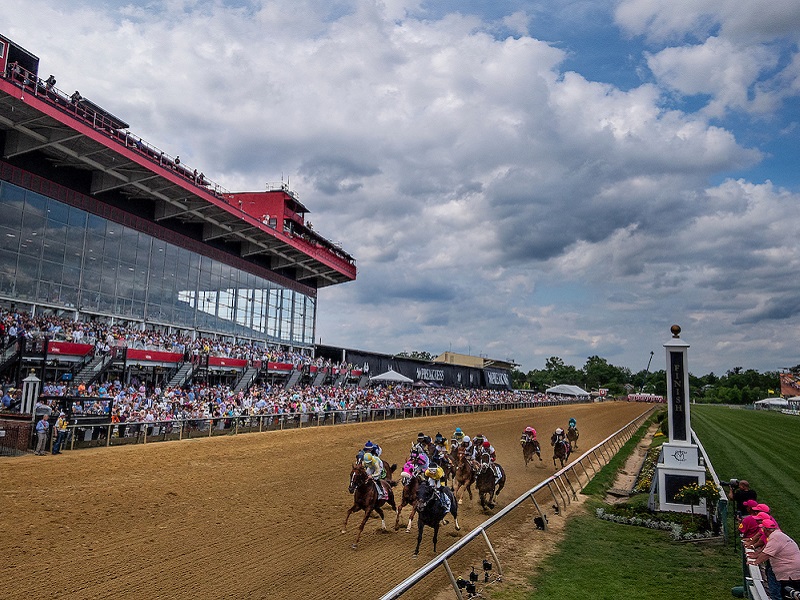 Five stakes races are on a super Sunday menu at Pimlico, where the Rainbow 6 jackpot carryover pool was just under $1 million heading into this racing week. The Shine Again Stakes, part of the Mid-Atlantic Thoroughbred Championship (MATCH) Series, headlines the action with a quartet of supporting turf stakes. Forecasts are for dry skies over Saturday and Sunday in Baltimore, which is good news for the grass action.RACE 4 (2:18PM ET) // SEARCHING STAKES // 1 1/2 MILES (TURF)Eight turf marathoners are entered, including a trio of New York-based shippers. Blame Debbie (Graham Motion) and Lucky Money (Arnaud Delacour) are the only fillies in the race to win at this 12-furlong distance, and they did so in Keeneland’s Grade 3 Dowager and Belmont Park’s listed Zagora Stakes, respectively. Class and conditioning for the trip are difficult to overlook. Expect it to come down to this pair with the lean toward Blame Debbie.

**This Race has been taken off turf**

The namesake race for Maryland’s legendary grass sprinter attracted a dozen runners for turf (plus a main-track only entrant). Keep an eye on So Street for a Jamie Ness barn that has lit up the region in June. This one has been racing in open company of late and gets back to the Maryland-bred and sired restricted ranks. He was runner-up in the Maryland Million Turf Sprint last fall in similar company. Cannon’s Roar, runner-up in the 2020 Maryland Million Turf, cuts way back in distance for what looks like a seasonal starting off point for Dale Capuano’s 7-year-old. New Jersey-based shipper Introduced is a stakes winner at Laurel and Saratoga. She’ll try the boys, but has plenty of class, albeit from a difficult outside post. So Street will be the play.


RACE 8 (4:31PM ET) // PRINCE GEORGE'S COUNTY STAKES // 1 1/8 MILES (TURF) Eleven open-company turf routers are entered (plus a main-track only), including the two-three finishers from Preakness Day’s Grade 2 Dinner Party Stakes – Talk Or Listen and Midnight Tea Time. The deep field also includes April’s Henry S. Clark beaten favorite Pixelate, runner-up by a nose in his first trip over the Pimlico lawn. Add in shippers from New York (Argonne) and Kentucky (Logical Myth, a Joe Sharp stablemate to returnee Midnight Tea Time) and this may be the deepest and best race on the entire card. Pixelate won last year’s Grade 2 Del Mar Derby and was beaten only 3 lengths in Gulfstream’s Grade 1 Pegasus World Cup Turf this winter. His Clark runner-up was flattered some when third-place finisher Dreams of Tomorrow came back to smash Belmont allowance runners next out. With a bit more time between starts, give the edge to Pixelate over the Dinner Party alumni Talk Or Listen and Midnight Tea Time.


RACE 9 (5:04PM ET) // SHINE AGAIN STAKES // 6 FURLONGS (DIRT) Rising star sprinter Chub Wagon looks to remain unbeaten through her seventh start when she faces seven rivals in this MATCH Series dash. Lupe Preciado’s 4-year-old filly makes the trek from Parx in a preferred placement after scratching from last week’s Bed O’ Roses at Belmont for this spot. That she worked June 8 between the scratch and refocused goal is a good sign that this was, indeed, a preferred spot – vs. something amiss where they didn’t want to run in New York last week. She will be heavily favored and a likely single for many in multi-race bets. The Shine Again field includes Hello Beautiful, who hasn’t run since her three-stakes winning streak was snapped in February’s Grade 3 Barbara Fritchie at Laurel. Don’tletsweetfoolya has made the lead in seven straight races, so this could be quite a tussle up front with the inside-drawn pair of Chub Wagon and Hello Beautiful. If you’re going to beat Chub Wagon, look for a closer. Unique Factor for sprint specialist Peter Miller could fit that bill in her local debut; she’s faced the likes of Guarana, Finite and Gamine over the past year and could find the class relief beneficial. It would seem like Chub Wagon early and Unique Factor late as the Shine Again scenarios.

**This Race has been taken off turf**Open company 3-year-old filly turf sprinters square off with a dozen entered for grass (plus a main-track only). Wesley Ward adds first-time Lasix to fast and classy Amanzi Yimpilo, while also sending out international Group 3-placed Wink, who drew the far outside post. No one prepares turf sprinters in the East and Midwest any better than Ward, so these have to be respected. They dueled each other into submission in the Mamzelle at Churchill Downs on May 8, so it will be curious to see if either can throttle down (or if Ward, as he often does, will scratch one of these). Honey Pants cuts back in trip for Christophe Clement and is stakes-placed in New York and at Gulfstream. Street Lute won five straight stakes on dirt before being knocked off her game in her last two. She’s never tried turf, and her sire Street Magician gets only about 9% winners on the Pimlico lawn (11% overall), according to Betmix stats. The Ward speedballs and the late run of Honey Pants should have this one covered. Amanzi Yimpilo is preferred.