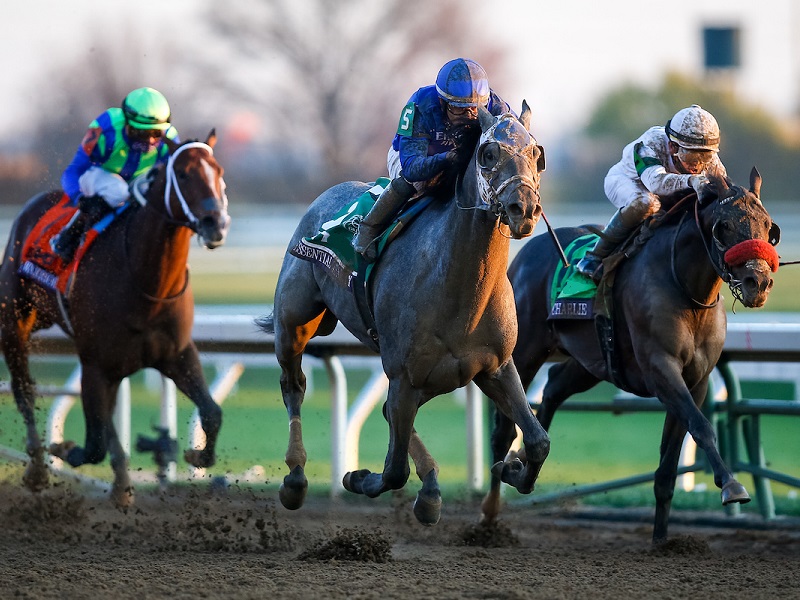 There is ample evidence that the 2020 Breeders’ Cup Juvenile cast was considerably better than the field in the 2019 edition.

Eight competed in the 2019 BC Juvenile at Santa Anita. They have gone on to win just three of 52 starts between them, which is a puny 5.7% success rate.

Fourteen started in the 2020 BC Juvenile at Keeneland. They have subsequently won nine of 38 starts combined, a significantly higher 23.6% success rate.

The 2020 BC Juvenile has produced three times more subsequent victories than the 2019 version.

In yet another example of the huge difference between the strength of the 2019 and 2020 BC Juvenile fields, not one of the three subsequent wins by the 2019 group came in a graded stakes race, though it is true that one of victories did come in a lucrative foreign race.

Full Flat, who finished fifth in the 2019 BC Juvenile, won the $8 million Saudi Derby the following year.

Making it even worse that the 2019 BC Juvenile field has gone on to win just a total of three races, one of those three victories came when Scabbard was victorious in the claiming ranks for a $20,000 price this year at Churchill Downs on April 28.

By contrast, the 2020 BC Juvenile participants have gone on to register nine graded stakes wins, highlighted by Rombauer’s victory in the Preakness and Essential Quality’s win in the Belmont.

After capturing the 2020 BC Juvenile, Essential Quality, by himself, has won as many subsequent races -- three -- as the entire 2019 BC Juvenile field combined.

Below is a horse-by-horse look at the subsequent record of all starters in the 2019 and 2020 renewals of the BC Juvenile:

When Essential Quality overhauled pacesetter Hot Rod Charlie to take the Grade I Belmont Stakes by 1 1/4 lengths on June 5, Essential Quality was credited with a career-best 109 Beyer Speed Figure while winning for the sixth time in his seven lifetime starts.

As far as Beyer Speed Figures are concerned, Essential Quality has done something rarely seen. Since recording a 69 Beyer in his career debut, he has managed to post a new top in each successive start.

While it’s not impossible that Essential Quality will get a 110 or higher Beyer in his next race, it would surprise me.

Hot Rod Charlie has received much praise for finishing second despite running the fastest opening quarter-mile (:22.78) in the long history of the 1 1/2-mile Belmont. He also has quite an interesting Beyer Speed Figure pattern.

Since receiving a 51 Beyer in his career debut, Hot Rod Charlie has recorded a new top in each successive start, with the exception of back-to-back 94s in his final start at 2 and first start at 3.

INDICATIONS OF A STRONG CROP

And don’t forget Life Is Good. Undefeated in three career starts, he won Santa Anita’s Grade II San Felipe Stakes by eight lengths on March 6. At that time, Life Is Good was the early Kentucky Derby favorite in future wagering conducted by Churchill Downs. However, Life Is Good then went on the shelf after he was found to have a hind-leg injury following a bullet six-furlong workout in 1:11.40 at Santa Anita on March 20.

Mandaloun, who like Essential Quality is trained by Cox, won Monmouth Park’s 1 1/16-mile Pegasus Stakes last Sunday, though it turned out to be a much closer call for the overwhelming 3-10 favorite than most expected.

Steadied when in close quarters to drop back shortly after the start, Mandaloun trailed in the field of five through the early stages. He generated a wide rally to wrest the lead away from Weyburn in upper stretch.

Mandaloun increased his advantage to about a length with a sixteenth to go, but then he appeared to try to pull himself up when thinking he had done enough or Weyburn came back on or a combination of both.

Mandaloun did win, but by only a neck.

“I think our horse might have got lost a little bit once he made the lead, maybe didn’t stay focused,” Cox was quoted as saying regarding Mandaloun’s Pegasus win in a Daily Racing Form story written by Marcus Hersh. “That could be something we work on going forward in terms of timing. He took a ton of dirt [kick-back], about as much dirt as you’re going to take with four other horses in the race. I was able to get back to the test barn and saw that he cooled out quick. In the end, he’s a young horse that’s learning.”

Mandaloun’s final time was 1:44.63. The Kentucky-bred Into Mischief colt was credited with a 93 Beyer, a pretty substantial drop from his career-best figure of 101 when he lost the Kentucky Derby by just a half-length.

The next race for Mandaloun is scheduled to be Monmouth’s Grade I, $1 million Haskell Invitational at 1 1/8 miles on July 17.

Medina Spirit also is a candidate for the Haskell. He worked three furlongs in :37.60 for Baffert at Santa Anita on Monday. It was Medina Spirit’s first workout since finishing third in the Preakness.

Though Weyburn did not win last Sunday, he did give a good account of himself. Looking down the road, something to keep in mind vis-a-vis the longer Haskell is Weyburn galloped out in front of Mandaloun after the finish of the Pegasus.

Trained by Jimmy Jerkens, Weyburn kicked off his 3-year-old campaign by winning Aqueduct’s Grade III Gotham Stakes in a 46-1 upset on March 6. He then finished fourth in the Grade II Wood Memorial at the Big A on April 3 in his only start between the Gotham and Pegasus.

The belief here is Following Sea just might establish himself as a star on the national racing stage during the second half of the year. From what I’ve seen, his sheer talent might -- I repeat, might -- be on a par, or even exceed, all of the other 3-year-old males in the U.S.

Originally trained by Bob Baffert, Following Sea was a 9-10 favorite when unveiled at Santa Anita on March 6. The Kentucky-bred Runhappy colt finished second, then was disqualified and placed third for causing interference. He recorded a modest 77 Beyer Speed Figure, far lower than many had anticipated.

Following Sea ran to the hype in his next start. He stepped six furlongs in a crisp 1:09.92 to win a maiden race by 5 3/4 lengths at Oaklawn Park on April 10. Finishing second was the Steve Asmussen-trained Happymac, also a Kentucky-bred Runhappy colt.

In Happymac’s next start, he won a 5 1/2-furlong maiden race by 10 1/4 lengths at Oaklawn on April 30, an effort that certainly flattered Following Sea.

In Following Sea’s maiden victory, he made a gigantic leap in the Beyer Speed Figure department, going all the way up to a 97.

After graduating from the maiden ranks, Following Sea was pure poetry in motion when he won a 6 1/2-furlong allowance race on a wet track rated good June 3 at Belmont Park for new trainer Todd Pletcher. Following Sea ran the opening quarter in :22.03, then zipped the half in :44.79 and six furlongs in 1:08.82 before completing his 6 1/2-furlong journey in 1:15.28.

The 100 Beyer Speed Figure that Following Sea was credited with for his June 3 victory was impressive. Just as impressive was the consummate ease with which the Beyer was accomplished.

According to Pletcher, the two races under consideration for Following Sea’s next start are Belmont’s Grade II Dwyer Stakes, a one-turn mile race on July 5, or the Haskell.

Maybe I’m crazy, but I could see Following Sea possibly -- I repeat, possibly -- having an Arrogate-like second half of the year as a sophomore.

When Arrogate was 3, he lost his first career start (as did Following Sea). Arrogate then reeled off five straight wins that year en route to a 2016 Eclipse Award as champion 3-year-old male.

The icing on the cake came in Arrogate’s final start at 3. He won the Grade I BC Classic at Santa Anita by a half-length. The runner-up was no less a foe than California Chrome, a two-time Horse of the Year (2014 and 2016).

The Travers was Arrogate’s fifth career start. Depending on what Following Sea does in his next race, the Travers could possibly be his fifth lifetime start.

Arrogate recorded a mammoth 122 Beyer Speed Figure in the Travers. He nearly duplicated that figure by recording a 120 Beyer in the BC Classic.

Prior to the Travers, Arrogate’s top Beyer Speed Figure had been a 103. In his final start before the Travers, he recorded a 99 Beyer.

Considering how effortlessly Following Sea reached 100 on the Beyer scale, I don’t think it’s far-fetched that a much bigger figure might be seen from him down the line.

Another talented 3-year-old colt trained by Pletcher to keep an eye on during the second half of 2021 is Mahaamel. The Kentucky-bred Into Mischief colt finished second at first asking on April 24 at Belmont in a seven-furlong maiden race won by the $1.5 million auction purchase First Captain.

With a race under his belt, Mahammel won a seven-furlong maiden race by 3 1/4 lengths on a muddy track June 4 at Belmont when blinkers were added to his equipment. He recorded a 99 Beyer, up from the 93 figure in his first race.

After First Captain’s maiden victory, in which he recorded a 94 Beyer Speed Figure, he splashed home to a one-length win in a one-mile allowance contest on a sloppy track May 29 at Belmont. Trained by Shug McGaughey, the Kentucky-bred Curlin colt received a 95 Beyer in his May 29 triumph.

First Captain, now two for two, looks like he might have some important wins in his future.

Still another very good 3-year-old, The Chosen Vron, won Santa Anita’s Grade III Affirmed Stakes at 1 1/16 miles last Sunday. Last early in the field of five, he came on in the lane to win going away by 1 1/4 lengths while racing farther than seven furlongs for the first time.

Trainer Eric Kruljac has done a terrific job with The Chosen Vron, who has lost only once in five career starts. The Chosen Vron now is a two-time Grade III winner. In his most recent start prior to the Affirmed, the California-bred Vronsky gelding won Santa Anita’s Grade III Lazaro Barrera Stakes by 3 1/2 lengths when racing 6 1/2 furlongs on May 15.

The lone blemish on The Chosen Vron’s record is his third to Baffert trainees Concert Tour and Freedom Fighter in Santa Anita’s Grade II San Vicente Stakes at seven furlongs on Feb. 6. Kruljac has attributed The Chosen Vron’s only loss in his second career start to greenness stemming from inexperience.

The Chosen Vron has been a gem of consistency Beyer-wise. He recorded a 90 Beyer Speed Figure when he won Santa Anita’s 6 1/2-furlong Echo Eddie Stakes for Cal-bred or Cal-sired runners on April 3, followed by a 90 in the Barrera and an 89 in the Affirmed.

After Essential Quality won the Belmont, he debuted in the Top 10 at No. 9 on last week’s NTRA Top Thoroughbred Poll.

Even though Essential Quality did not race last week, he climbs to No. 5 this week.

The Top 10 in this week’s NTRA Top Thoroughbred Poll: