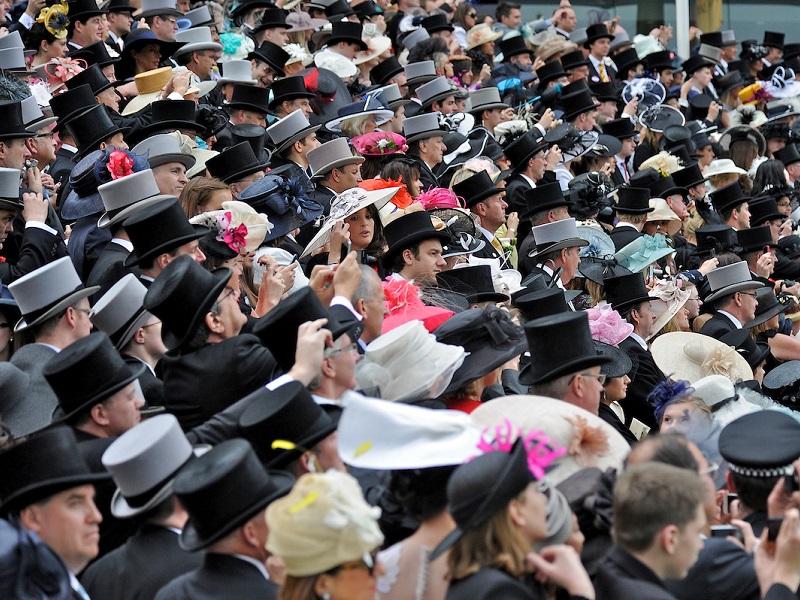 Racing at the Royal Ascot meeting began Tuesday and will go through Saturday. It’s one of the most important fixtures worldwide and something yours truly appreciates annually. We hope you’ve enjoyed reading daily Royal Ascot musings this week in the blog section of the Xpressbet web site. If you’ve been following along at home, you’ve probably gathered that we’re not a certified expert, but we thoroughly enjoy the show because it’s simultaneously familiar and noticeable different.

The most obvious similarity is the object of the game: Whoever gets there first wins! The most obvious difference? All races are run clockwise and on turf. There. By George, I think you’ve got it.

Some aspects of Royal Ascot racing are better than what we have here in the States. For example, photo finish results are determined within seconds after the race, not minutes. And actual finish photos are available and televised almost immediately.

Now, I enjoy sweating out a tight finish that might go either way as much as the next guy, but agonizing over a stretch run replay two…three…four…or five times while disputing the potential outcome with anyone within earshot seems so 70s. Immediate photo processing technology is available (it has been for a while). Tracks just don’t want to upgrade. That’s a shame. Horseplayers, like the accused, ought to be entitled to a speedy trial. It’s in the US Constitution, I think.

As I’ve often said, “I love visiting the UK, because I almost speak the language.” For example, in the UK an umbrella is a brolly; their football is our soccer; a ‘lift’ in either place suggests a ride but, in the UK, it refers to an elevator. In racing, the word ‘declared’ has a completely opposite meaning depending on where you are! In the US, a ‘declared’ horse has been scratched from a race. In Europe, a ‘declared’ horse is confirmed to start in a race. Not difficult to imagine how that could be confusing.

Like in the US, Royal Ascot races are numbered according to their order on the day’s card. However, across the pond, you’d better be familiar with race post times instead of race numbers. In the US, it’s the fourth at Belmont. In ‘British,’ that would translate to the Belmont 2:25. Assigning times to races instead of numbers makes a spot of sense. For example, you might tell me you absolutely love one running in the 4th at Podunk Downs on Friday. But, in order for me to make sure I don’t get shut out, I’d have to search for and note the approximate post time of the race.

Scratches at the gate also are handled differently ‘over there.’ Because post times are important, an unruly horse holding up the start of the race will be given limited opportunities to behave. If that’s not accomplished in a reasonable timeframe, matters will proceed without them. The horse will be scratch and the field dispatched, post-haste. No taking everyone out of stalls and reconfiguring numbers on the gate like they do in the US. Nope. Over there it all happens quickly. Either you’re in or you’re out. One. Two. Three. Scratch. ‘And they’re off.’

The folks at Royal Ascot had egg on faces Wednesday afternoon when the starting trigger may have been prematurely pulled before the Kensington Palace Stakes (6.10). A blindfold, used to help calm a horse while loading into the gate, was not removed from one horse’s eyes before the gates popped open and the field was dispatched.

That left jockey Silvestre de Sousa scrambling to unsuccessfully remove the blindfold from his mount Stunning Beauty. If New Jersey jocks think riding without whips is dangerous, they ought to try it on the backs of blindfolded horses.  de Sousa pulled eased his mount and there was a 30-minute delay while stewards decided if the 7-1 shot should be declared a non-starter and money wagered on the animal refunded.

Amazingly, at 6.47 (see, they even note the time when races go ‘official’), the verdict was ‘no refunds’ and many horseplayers discovered a novel way to lose money. Apparently, racing rules there only permit a horse to be declared a non-starter in certain cases and being blindfolded isn’t one of them.

During the Royal Ascot meet, I’ve been reminded about how much more emphasis Brits place on weight than we do in the US. They also strongly subscribe to course (translation: track) biases. A field of 16 runners is liable to split into two distinct groups—one close to the near rail and the other over by the far rail. That’s because jockeys and connections want their runners to be on the ‘best’ part of the course. US riders are aware of track biases but seldom do they take such drastic measures either on dirt or on turf.

You also may have noticed that Royal Ascot wagering numbers do not correspond to post positions as they do in the US. Noticed? It drives me mad! In a European Handicap race horses are assigned numbers based on weight. The horse carrying the most weight is assigned number 1 and the rest of the field follows in order of highest to lowest. In Weight-for-Age races, horses are numbered alphabetically. Apparently, over there, they not only value weight more than we do, but also the alphabet. The order in which they appear listed on a race card corresponds to respective starting stall or post positions.