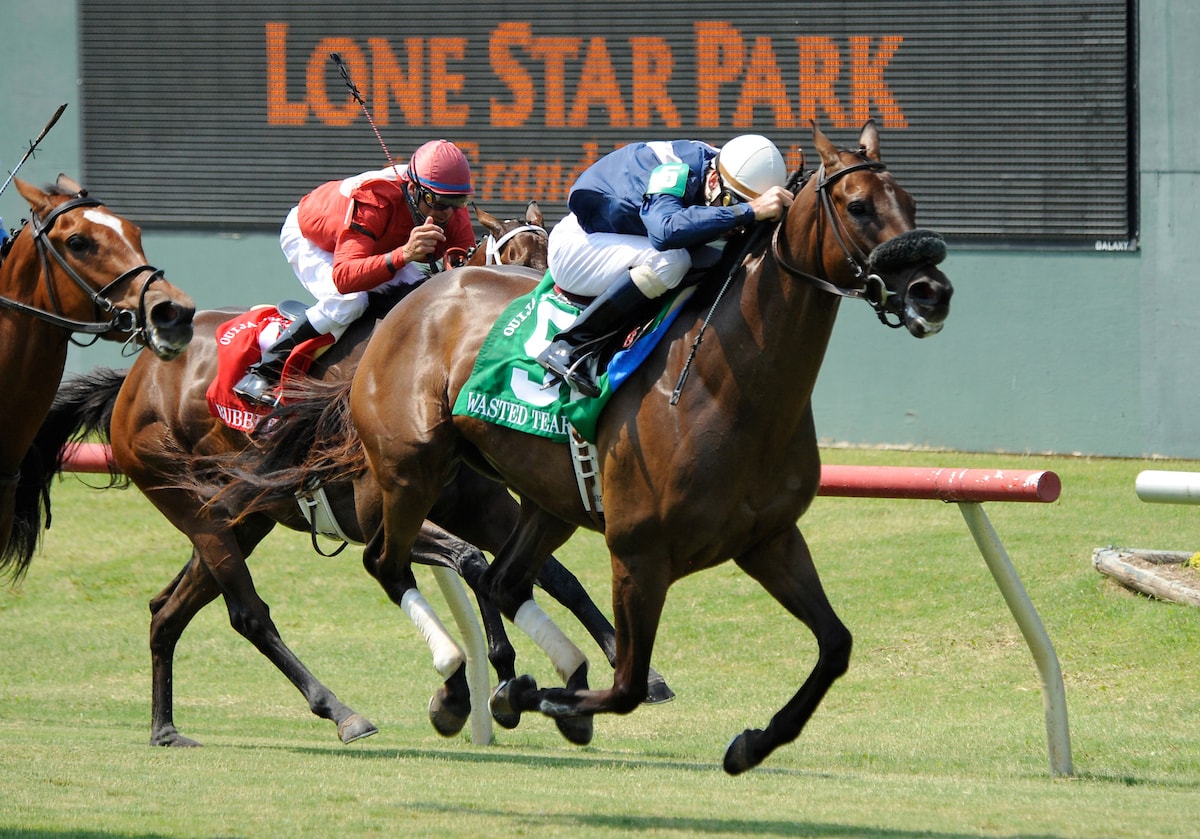 Lone Star Park’s card on Sunday will lure interest to Texas racing, especially for the Late Pick 4, which is an all-stakes affair.Starting with the eighth race and ending with the 11th, the sequence has stakes that have drawn a lot of shippers to face locally proven commodities.The suggested ticket this week totals $72, and here’s a look at the players:Race 8 (6:21 p.m. ET, Grand Prairie Turf Sprint Stakes)MY BOANERGES beat SHARE THE UPSIDE in a stakes race last time out and continues a nice surge under trainer Dallas Keen after the New Mexico-bred was off 1.5 years and came back to action in April. The stakes race came off the turf, but this one looks formidable on or off the turf.SHARE THE UPSIDE was favored in the loss to MY BOANERGES and is perfect in two Lone Star turf attempts. Has been with some of the best sprinters in the vicinity and clearly is a big player.ARCHIDUST, like Asmussen stablemate SHARE THE UPSIDE, won both Lone Star turf starts and is no stranger to stakes events. He won back-to-back stakes at Monmouth last summer and can apply some late pressure here.Race 9 (6:53 p.m. ET, Wasted Tears Stakes)CURLIN’S JOURNEY comes off a well-beaten third in a stakes race that came off the turf. Her last turf appearance produced an easy win.VALENTINES DAY made an impressive move for second in a stakes race at Sam Houston. A clean trip could produce a victory.ZAMZAM will probably be a long price but has won a couple over this course and can pick up a lot of pieces if the front runners falter.TIZAHRA ran against tough company in Kentucky, Florida and New York, and despite not having won since last July is a solid threat in his first Lone Star appearance.Race 10 (7:25 p.m. ET, Chicken Fried Stakes)YES IT’S GINGER rarely runs a bad one and is usually there to either take the lead or apply pressure at once. Won two straight on Fair Grounds turf and should be a strong factor in this one.UPTOWNBLINGITHOME has been impressive in allowance races and is a much better runner on turf, where she is three of five.RAINTREE STARLET seeks her fourth straight win over her fourth straight different surface. She won two at Oaklawn, took a stakes win at Will Rogers and most recently won an allowance race at Lone Star in a race that was moved to the main track. She was 0-for-4 early on in turf races but can continue to be a solid contender.A BIT OF BOTH has taken on some strong runners and won a stakes race at Gulfstream Park two races back. That one came off the turf, but she is two of five on grass and fits well.Race 11 (7:57 p.m. ET, Singletary Stakes)ME AND MR. C steadily came down in his last four and his only 1 1-8-mile race produced a stakes win at Tampa. He’s better the farther he runs and gets a nice pace setup here.DON’TASK DON’TTELL makes his first since November and comes off a year in which he won six straight, including four at Lone Star (three on turf). Won going 1 13-16th miles on the course. Tough to catch when he gets a lead.ARTIE’S RUMOR was up in time at this distance and was claimed by Moquett at Churchill Downs in his latest. Has kept some good company through the years and has the talent to be in the hunt.My Ticket
Race 8) #3 My Boanerges, #4 Share the Upside, #5 Archidust.
Race 9) #2 Curlin’s Journey, #3 Valentines Day, #5 Zamzam, #7 Tizahra.
Race 10) #3 Yes It’s Ginger, #4 Uptownblingithome, #6 Raintree Starlet, #7 A Bit of Both.
Race 11) #2 Me and Mr. C, #3 Don’task Don’ttell, #4 Artie’s Rumor.
Total Ticket Cost) 3,4,5/2,3,5,7/3,4,6,7/2,3,4 = $72 for $0.50