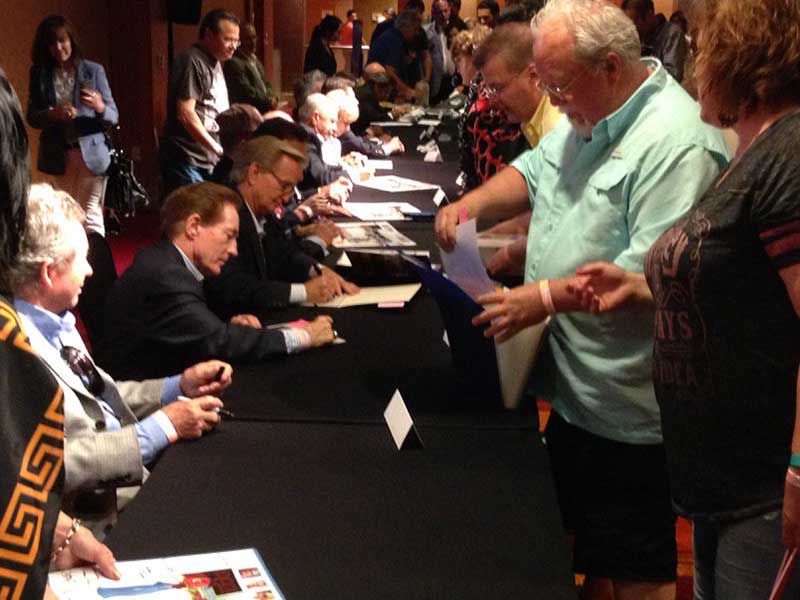 This past Saturday will go down as one of the highlights of my career in horse racing, and I am not sure I actually saw a single horse live during the day. As master of ceremonies for the fourth Jockeys and Jeans fundraiser at Parx, my attention was focused on the men and women of the saddle and a room chock full of 14 Hall of Famers and the fallen riders we were there to honor. It was a magical afternoon of togetherness, hopefulness and the bonus payoff was an unbelievable trip down memory lane.

My thanks to Parx management for inviting me to take part, Rich Romano and Sam Elliott chiefly among them; as well as a tip of the cap to Barry Pearl of Jockeys and Jeans and Nancy LaSala of the Permanently Disabled Jockeys Fund. Hopefully my jokes hit about 20%, since that’s the strike rate of a top-class rider. As a friend of mine used to remind me often, “They can’t all be winners.” And he was talking about his jokes, not picks.

Saturday’s event included a live auction, silent auction, autograph session and more to raise money and awareness for riders who were less fortunate than the 14 Hall of Famers in attendance who were able to walk away from their career. About a quarter-million dollars was expected to be raised when the final tallies come in. Total proceeds raised by the 4 Jockeys and Jeans events will surpass $900,000, according to event officials.

Some of legends of the turf I had met and interviewed many times before; others were only names I had read in history books. What a phenomenal opportunity it was to meet them and spend the day. By a loose count, we had more than 70,000 winners from the Hall of Famers in attendance and nearly 100,000 winners when you account for other jockeys in attendance as dignitaries and mere visitors to the historic gathering.

Julie Krone made her return to the limelight for the first time in years, and I had the fortune of several wonderful talks with her throughout the day, witnessing how much she was thoroughly enjoying the event. She said she only wished she had done it sooner and could not believe the emotional response she had when meeting the fallen riders and reuniting with the other retired jockeys. It was a heartfelt and fun day for her that included a lot of tears and a lot more laughs. In a room full of legendary men of the saddle, the pint-sized Krone owned the room. She was a star even among stars.

Hall of Fame jockeys in attendance, in addition to Krone, included Laffit Pincay Jr., Pat Day, Chris McCarron, Sandy Hawley, Manny Ycaza, Don Pierce, Bobby Ussery, Jorge Velasquez, John Rotz, Bill Boland, Earlie Fires, Braulio Baeza and Ramon Dominguez. We also had Pennsylvania legends Tony Black and Arnold Illiescu in the house. But it was the fallen riders who got the most applause and the most time sharing selfies with the public in a heart-warming portion of the ceremony. It was a treat to meet Jayme LaRocca, Sidney Underwood, Tony Dlugopolski, Sam Boulmetis Jr. and Vincent Amico. Vinnie went out of his way to thank me for being there. But I couldn’t help but think how thankful I was that HE was there and how HIS courage uplifted me.

Even I got involved with a donation as part of my opening schtick with Chris McCarron, jokingly burying a grudge I had for 30 years for him beating Bet Twice aboard Alysheba. Later I’d also make a winning silent bid on a big, Mike Smith-autographed and framed Zenyatta portrait from the Apple Blossom. I also came away with a couple of autographed posters from the entire cast of riders – one for me, and one for a special Night School gift later this year. It was a winning day at the track like I’ve never had before – without cashing a single ticket.

If you’d like to help out fallen riders, check out JockeysandJeans.com and PDJF.org.