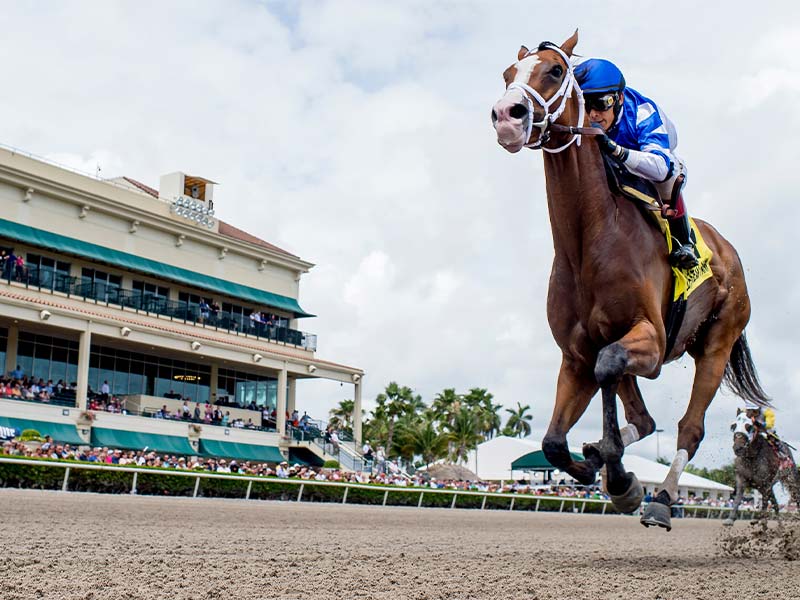 Jesus’ Team is back to the races Sunday at Gulfstream Park, and in the featured mile handicap, he’s assigned to carry 127 pounds, spotting opponents five to 12 pounds.The Handicap With No Name is the 10th race and third leg of the Late Pick 4, and the weight concession isn’t enough to keep Jesus’ Team from being a single. Jose Francisco Angelo’s star pupil has been off since a sixth-place finish in the Dubai World Cup, and his only other 2021 start produced a second-place finish behind Knicks Go in the Pegasus World Cup over this strip.Jesus’ Team has come a long way since winning a $25,000 claiming race against ‘non-winners of two’ last May and his turn toward greater fortunes began with a third in the Jim Dandy, followed by a third in the Preakness and a second in the Breeders’ Cup Dirt Mile.It’s difficult to find a downside to Jesus’ Team’s appearance. He’s been off six months off, but after the trip to the other side of the globe and some tough races against top-echelon opponents, the freshening up probably did him some good. His workouts have been very good, and the rivals he runs against today do not come close to what he’s faced.Jesus’s Team is the single on the suggested ticket, which totals $48. The three other races in sequence are anything but easy, and the singleton allows the necessary spreading out in other races without costing a fortune.Here is what’s happening on the Late Pick 4 ticket:8th Race (4:29 p.m. ET, claiming)RACE DAY SPEED makes the step up to a higher claiming level, but her form cannot be disputed. She’s won two straight for $6,250 and was claimed in each – most recently by the Tamara Levy stable.She has managed to carve out some outstanding trips in her last two and this is less than an impossible spot. She’s won four of 11 this year and running back to those recent races will make her a solid player here.Also on the ticket: BETWEEN DREAMS, INCLUDE THE BEAST, and GOODBYE GABY.9th Race (5:02 p.m. ET, allowance optional claiming)PASSION PLUS, like JESUS’ TEAM, is from the D’Angelo barn, and this pair gives their connections a good chance for a very successful day. PASSION PLUS has been in good form since March, with two wins and two seconds in five starts.Her strength is her ability to adjust to pace and not to require a particular scenario to make her run. This is a wide-open event, but she could rate an edge because she consistently gives herself a chance.Also on the ticket: TIZ ENOUGH, LOOKINLIKEAQUEEN, WONDER BLONDY, LITTLE BIT GOOD, and AIZU.10th Race (5:35 p.m. ET, handicap)JESUS’ TEAMLots to like about JESUS’ TEAM, and if runs anywhere close to his ability, he should be able to take this.Also on the ticket: None, he’s a single.11th Race (6:08 p.m. ET, maiden claiming)SASSY CAT showed signs of life two races back when she set the pace and finished third going 7.5 furlongs. She’s back to five furlongs, has enough speed to stay close and likely will have some punch at the end of it, having gone longer last time.This maiden-claiming race is a tough handicapping proposition and requires a few of these. SASSY CAT has a good chance to work out a decent trip, and that could give her a slight advantage.Also on the ticket: SHOULDAKNOWNBETTER KENYA SUN JULIE BIRDMy Ticket
Race 8) #2 Race Day Speed, #5 Between Dreams, #7 Include the Beast, #8 Goodbye Gaby.
Race 9) #4 Tiz Enough, #6 Passion Plus, #8 Lookinlikeaqueen, #9 Wonder Blondy, #11 Little Bit Good, #12 Aizu.
Race 10) #5 Jesus’ Team.
Race 11) #1 Sassy Cat, #2 Shouldaknownbetter, #3 Kenya Sun, #12 Julie Bird,
Total Ticket Cost) 2,5,7,8/4,6,8,9,11,12/5/1,2,3,12 = $48 for $0.50