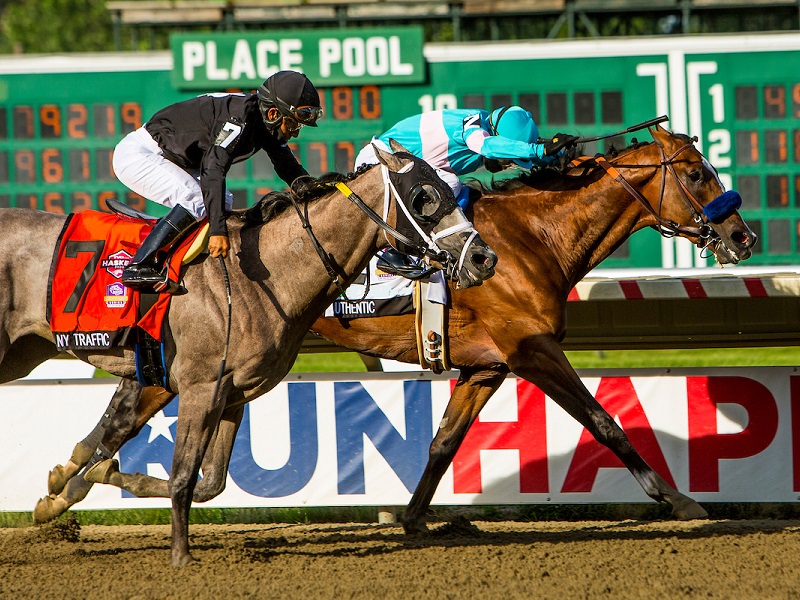 Saturday’s 54th running of the Grade 1 $1 million Haskell Stakes at Monmouth lured Kentucky Derby runner-up Mandaloun, Preakness runner-up Midnight Bourbon and Belmont Stakes runner-up Hot Rod Charlie among a field of 7 as drawn this afternoon. The mile and one-eighth Haskell, which has been run since 1968, has seen 11 of its winners go on to be named Champion 3-Year-Old at year’s end, including last year’s titlist and Horse of the Year Authentic.

Mandaloun and Hot Rod Charlie will leave the gate alongside one another in posts 3 and 4, respectively. Hot Rod Charlie was tabbed the 6-5 morning line favorite with Mandaloun co-second choice at 3-1. Rail-drawn Following Sea was also projected at 3-1 in his stakes debut. The Haskell’s other leading player, Midnight Bourbon, starts from post 6 at 9-2 in the morning line.

Horseplayers betting the Haskell with Xpressbet and the 1/ST BET app can take advantage of up to a $10 Money-Back Special on win bets if your selection finishes second or third. The Money-Back Special also will be offered on the Grade 1 United Nations on the Monmouth undercard.

Since all four of the race’s key players have a forward running style and the Haskell typically plays to early speed, it will be interesting to see how the battle shakes out. Widest-drawn Midnight Bourbon attracts leading local front-running ace Paco Lopez to the saddle and could be used aggressively. Don’t be surprised if he’s the pace marker trying to hustle and clear into the clubhouse turn. Rail-drawn Following Sea makes his stakes debut as well as his 2-turn unveiling under the typically patient Joel Rosario. Following Sea competes for 3-time Haskell-winning trainer Todd Pletcher.

As for the battle of the runner-ups, note that Kentucky Derby second-place finishers like Mandaloun have a strong history in the Haskell. Such winners since 1999 include Menifee, Lion Heart, Bluegrass Cat, Exaggerator and most recently Good Magic in 2018.

For more handicapping analysis of this year’s Haskell, be sure to check back Friday at Xpressbet.com and news.1st.com for Eddie Olczyk and Jeff Siegel’s exclusive handicapping video.