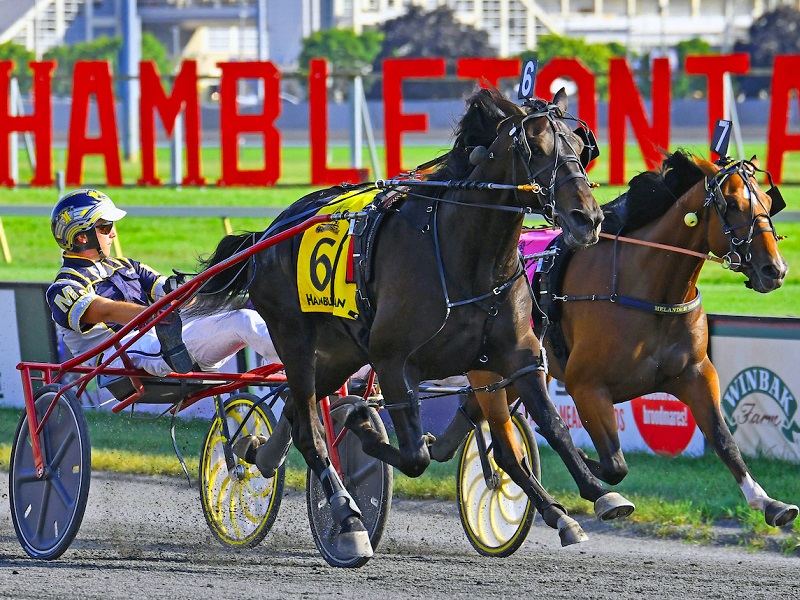 ‍The field for the 96th Edition of the $1 Million Hambletonian at The Meadowlands on Saturday, August 7, 2021.

1-Delayed Hanover (7/2) - Trainer Ake Svanstedt had four entries in the Eliminations and three qualified for the Final. This colt was forwardly placed last week with Dexter Dunn between the pipes and took advantage of an efficient trip to roll by down the lane in a snappy 151.1. As it turns out, Yannick Gingras will steer this son of Southwind Frank as Dunn chose Nancy Tatker's pupil Really Fast, who leaves from post 7. That move caught me by surprise, normally drivers will stick with an Elimination winner. Gingras will likely leave and be on the lead or close to it throughout. Winner of 4 of 12 starts should be a main player and has hit the board in 5 of 6 M1 races with one picture.

2-Take All Comers (12-1) - This Jim Campbell trainee started from past 8 in his Elimination and finished a good 4th rolling the back half in 55.1.  Dave Miller is the usual pilot, and he will be steering in the Final. Miller is the right kind of driver for this son of Creatine. He has the patience to work a stalking trip and this colt has enough gate speed to get a good early seat. Big M record is 0-3 but has hit the board in 10 of 16 lifetime with 3 wins. Might be a notch below the best of this field but could be used in gimmicks at a price.

3-Spy Booth (15-1) - This is 1 of 3 Takter trainees who made the Final. This colt is still a maiden and Tim Tetrick will be in the sulky. But the $460,000 yearling purchase looks much better now than when put away last September. Takter has commented, this horse went from ignorant to willing. That said, it would still be an upset if he crossed the wire first and hasn't won in 8 starts in East Rutherford.

4-Captain Corey (3-1) - The good news for the Svanstedt barn is they have the pre-race favorite going into the Hambo. Coming off a gate-to-wire score leaving from post 7 in 151.2, the morning line status is deserved, especially after being parked through the opening quarter. But if his colt lands on the point in the early going most likely someone will race at him. It should be difficult to set the fractions to his liking. Svanstedt  takes a seat behind his own pupil who has won 7 of 11 lifetime. Corey has finished no worse than 2nd in 3 M1 starts and has been in the winner's circle twice. Should be a major player, but the question will be the trip. Not sure a picture will be happening without leading at the top of the lane.

5-Locatelli (15-1) - This is another Takter entry and will be driven by Andrew McCarthy. Scott Zeron had the lines in the Elimination. The effort wasn't anything special, but it was Zeron's first time steering and he drove conservatively. Should offer a big price, has had some breaking issues, and doesn't look like a trip to the winner's circle is likely.

6-Sonofamistery (4-1) - Went off at 2-1 and was handled cautiously last week. Actually, was fortunate to qualify as was blocked down the lane but Brain Sears got the job done. The Marcus Melander trainee has a 150.2 mark this year and that is the fastest in the field. Sears won the 2012 Hambo with this colt's sire Muscle Hill and the dam is Mistery Woman who was a top trotter. Melander is seeking his first Hambletonian victory and Sears will be shooting for number four.  To add to the back story this colt was purchased because of the white heart on his forehead. Beyond the cute story is a fine young trotter with a legit shot if minds his manners.

7-Really Fast (5-1) - This is Nancy Takter's #1 pupil and the Big M's top driver Dexter Dunn will be at the controls. Dunn's pick over #1 is a talented colt, winning 4 of 8 starts all at the Big M. If there is reason to doubt this son of Muscle Hill it would be a lack of seasoning. He did not race at 2 and has the fewest number of races (8) in the field. But that also makes his accomplishments this year even more amazing and evidently Dunn believes this colt is just scratching the surface. Qualified on 7-17 after breaking stride in 2 straight starts on 6-11 and 7-10. Since then, has been good and one of the breaks was on a sloppy track (7-10). The fractions should be lively and Dunn may be the fastest of all trotting down the lane. But this will be the first time this colt races in consecutive weeks.

8-Venerate (8-1) - Julie Miller's trainee has only 5 starts this year after being named the 2020 Dan Patch Two-Year-Old Trotter of the Year. This post draw does compromise chances of cashing the top check but with over $807k in the bank it's not an impossible task. Did stop the timer in 152 flat last week, which was his fastest time this year. Similar to #6, raced from the back, finished well and could have more to give in the Final.

9-Ambassador Hanover (15-1) - This is the last of the Svanstedt stable entries and the least likely to hit the board from this post. Last week's effort was dull but good enough to qualify even with a 28.4 last quarter. This Chapter 7 colt banked some nice money this year with a 2nd place finish in the $500,000 Yonkers Trot. Actually, had a nice span of races in June and July and maybe now his form is starting to roll over. Scott Zeron will be at the controls.

10-Cuatro De Julio (10-1) - This son of Trixton will be driven by 29-year-old Lucas Wallin who makes his Hambletonian debut but has trained 3 Oaks finalists.  Finished 2nd to Delayed Hanover in his Elimination and was forwardly placed throughout after leaving from post 1. Doesn't appear to have enough gate speed to get a close-up seat from out here, and the post draw may have sealed his fate.