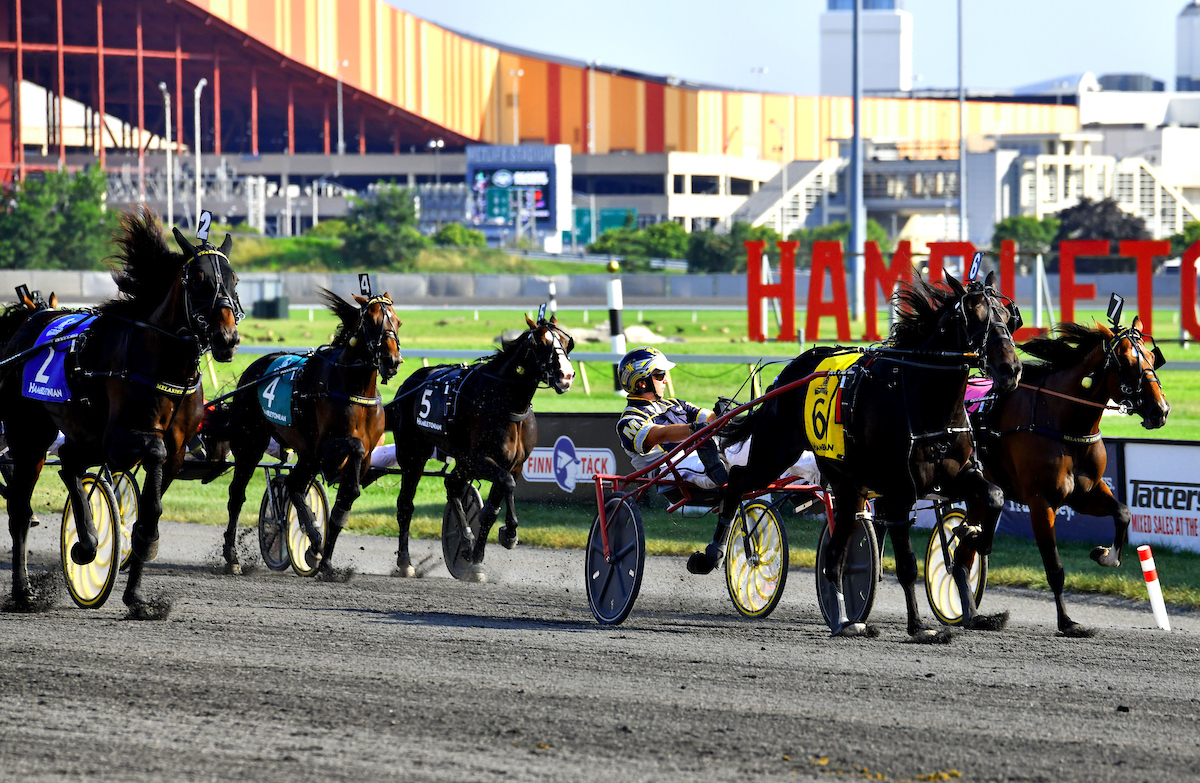 It is Hambletonian Day at the Meadowlands and the giant 16 race card kicks-off at Noon EST. The main events will be the Hambletonian Oaks (Race 14) with a $500,000 purse and the 96th running of the Hambletonian (Race 15) which has a $1,000,000 purse. The star-studded card has a total of $3.6 million in purses, and the 0.50 Late Pick 4 will have a $125,000 guaranteed pool with a 15% takeout. That sequence begins in Race 12, and it will be my focus. There will be mandatory payouts on this program because it is the last day of the Big M meet.Don't forget to register for the Xpressbet cash back promotion on the Hambletonian.Comments and selections below are based on a fast track.Race 121-Cattlewash (3-1)-Winner of 2 straight has a big heart. Doesn't usually string together a bunch of wins but this could be the time to get a longer streak going. Burke trainee could either get on the point or stay close to the lead and look to take control later.3-Allywag Hanover (4-1)-Winner in 7 of 16 starts at M1 has been used hard off the gate in 2 recent races and just missed a picture last week. But might not be hell bent on battling #1 or #6 off the gate here. Speed isn't an issue with this Alagna trainee, and it will be up to TMac to use it at the right time.5-Captain Barbossa (8-1)-Finished 4th last week in a needed start after being off 3 weeks. This time Dunn won't stay on the rail and be blocked down the lane. Probably won't be 12-1 but the price should be solid. Best to not overlook, likes to run down a target and will be raced differently this time.Race 134-Hypnotic AM (4-1)-Has hit the board in 6 of 7 races in 2021 but has only 1 win. This Melander trainee is also very comfortable at the Big M hitting the board in 11 of 12 starts. Should off a fair price and the last 3 races have been on an off- track. Could be sitting on a big try and will use instead of the 2nd morning line choice, 6-When Dovescry.5-Atlanta (9/5)-Has won 2 of 4 starts this year and was nipped by #6 in last. Hasn't been used early in the mile in the last 3 races. That could change here, and either way she should be tough to beat again.Race 14-Hambletonian Oaks3-Awesome Trix (9/2)-Winless at the age of 2 and was only a $13,000 yearling purchase. Cute stories don't usually win big races, but this Beaver trainee could be peaking at the right time. Raced the 2nd half in 55.3 to win for the 1st time at M1 leaving from post 9 in her Elimination and it was a ground saving trip. Won't win this race coming from way back and could be placed near the top of stack. Might be best of all with a sharp steer by Zeron.4-Lady Chaos (7/2)-Got on the engine and didn't look back last week. Trotted the back half in 55.4 and has not been worse than 3rd in any of her 8 starts this year. Should be in the mix at the wire and has been too consistent to not respect.5-Bella Bellini (3-1)-Usually has had her way with #4 this year but couldn't catch her last week as an odds-on choice. Today could be a different story but both fillies appear to be at the top of their game.Race 15-The 96th Hambletonian1-Delayed Hanover (7/2)-Svanstedt pupil wasn't Dunn's choice but Gingras has driven before, and he doesn't wilt in big races. Gingras has won the Oaks five times and has a big shot to take the top prize here. This colt has some advantages over others. Has raced before on only one week's rest and has won on the engine. Maybe those factors will come into play.6-Sonofamistery (4-1)-Sears has won the Hambo 3 times and Melander is looking for his 1st. This son of Muscle Hill has the fastest winning mile in the field for 2021, 150.2 which happened in East Rutherford. Was handled conservatively in the Elimination and that should change here. Has enough gate speed to be forwardly placed and if minds his manners it could be picture time.7-Really Fast (5-1)-Takter trainee was Dunn's choice and has been improving versus tough foes. This is the only trotter in the field who didn't race at 2. Not sure what the strategy will be off the gate, but Dunn will likely be on the lead or well within striking range turning for home. This colt has not raced in consecutive weeks before.My Ticket