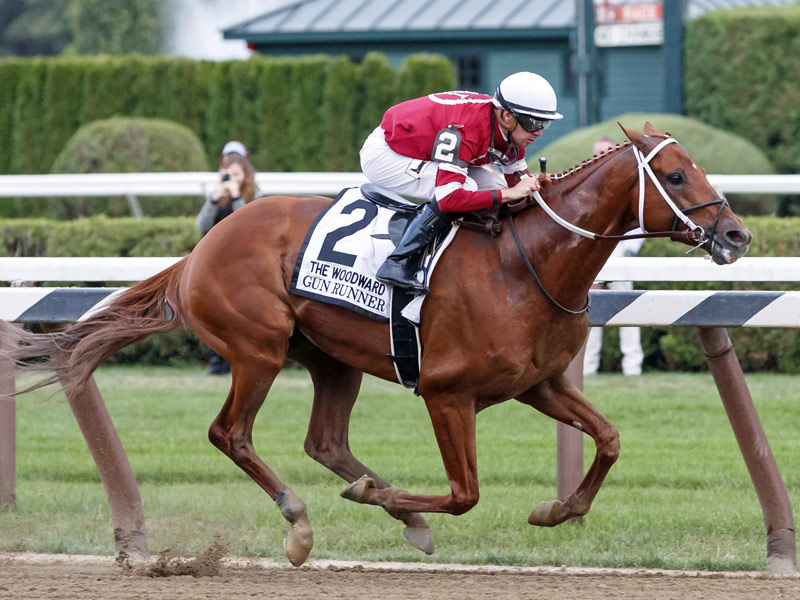 Forecast: The opener is a state-bred juvenile sprint filled with question marks that reduces the handicapping process to an educated guess. Daufuskie Island is bred for speed on both sides of his pedigree, shows a brief but intriguing work tab, and looked pretty good on video when breezing a half mile over the Saratoga training track six days ago in :48 3/5, the second fastest of 29 for the distance. The J. Englehart-trained colt displayed quick action and good athleticism to indicate he might have more zip than what he was being allowed to show. The barn has had a slow meeting but overall has okay stats with first-timers, so in a wide open affair the son of Goldencents may be as good any. We’ll try him in the win pool and in rolling exotic play but if you feel the need to spread, go right ahead.

Forecast: Flashing Red moves up a notch following a rare $32,000 claim by trainer H. DePaz. She adds blinkers for the first time, stretches out again, and switches to speed rider R. Santana, so from her favorable inside draw the daughter of Violence surely will be sent to establish the running, a strategy that has worked for her in the past. Candy Flower makes a barn switch to M. Maker and is another that likes to be on or near the lead, though her “speed” shows up more often in marathon traces. Today, we expect a stalk and pounce trip from the Twirling Candy filly, who has utilized that tactic for success in the past. In a field lacking in effective closers, these are the two we’ll be using in our rolling exotics.

Forecast: Mrs. Orb is the high weight at 123 lbs. in today’s listed Saratoga Dew H. and based on her present form the veteran mare should be able to add to her impressive resume. First or second 15 of 25 career outings, the M. Micelli-trained 6-year-old is fresh from winning the Caesar’s Wish S. at Pimlico six weeks ago, has trained steadily since, and has run well (twice second) in her two previous outings over the Saratoga main track. She may not be the most accomplished entrant in the field but she’s probably the most reliable. Simply Ravishing was a Grade-1 winning filly as a two-year-old but that’s no guarantee that she’s the same filly now. Last of six in her only 2021 appearance during the sprint meeting at Keeneland (she was favored over Malathaat in the Ashland S.-G1), the daughter of Laoban returns for K. McPeek with a series of drills that – at least in theory - should have her fit enough. But in viewing the videos of her recent workouts it’s hard to have a lot of confidence. A five runner field requires the handicapper to take a stand, so we’ll go with the more dependable Mrs. Orb on top, and if ‘Ravishing goes out and wires the field, good for her, and welcome back.

Forecast: Chocolate Cookie stumbled badly at the start to lose her best chance and then closed wide against slow fractions to be a much-better-than-looked third in a similar event here last month. It was her first outing since last October, and even in defeat she gave the impression of being a better filly now than then. Today, from a good inside draw and with a clean break, a ground-saving trip, and decent fractions in front of her, the daughter of Declaration of War should have every chance to make amends. Spungie pulverized a first-level allowance field last time out in good style, though to be fair the race set up perfectly for her and she didn’t really beat much. Still, the lightly-raced and improving daughter of Hard Spun shows rising speed figures with each outing, and it would be surprising if she didn’t produce yet another forward move today. We’ll give Chocolate Cookie the edge on top but include both in our rolling exotics.

Forecast: Key Point has shown enough in the two video workouts we were able to view to expect that the C. Brown-trained colt can win at first asking in this state-bred sprint for juveniles. The son of Into Mischief was hard held in both drills while appearing best in a team and gave the impressive that he could have gone considerably faster if turned loose. He’s been given enough of a foundation to be fit and ready, and in a field in which the known element doesn’t inspire let’s go with this promising newcomer on top in the win pool and as a rolling exotic single.

Forecast: Maiden juvenile fillies bred in New York compete in a turf sprint that is loaded with first-timers, three of which appear to be a cut above the others. Skyward Princess, a debuting Air Force Blue filly from the C. Brown barn, looked fairly decent in a recent gate work while best of the team, and considering her pedigree and connections she looks like a live item first crack out of the box. Pimenova, from the first crop of the so far very successful Practical Joke, brought $200,000 through the ring and sports an impressive series of local works that indicate she has plenty of ability. However, the otherwise high-percentage D. Gargan barn has weak stats with debut runners, so we’re not quite sure if we’re going to see a finished product. You have to use her, though. On the other hand, Cricket West comes from the J. Abreu stable, which has a superior record with the first-time-starter angle. In her case, the workout times are okay, not great, but maidens from this outfit almost always run better than they work, so beware.

Forecast: We’ll go three-deep in this restricted (nw-2) $16,000 claiming sprint for fillies and mares but not with any degree of confidence. You should include as many on your ticket as your budget allows. Malibu Luna takes a nosedive in class while trying to find her proper level on this circuit, and if this isn’t it, she’s in trouble. The W. Mott-trained filly will be making her third start off a layoff and projects to be a strong late factor with anything close to her best effort. A nice half mile breeze last week (4f, :48b) is encouraging. On a Tour tries dirt for the first time and is another big class dropper likely to do her best work from off the pace. Claimed for $50,000 in Florida in February and with only one outing since, she’s obviously had some problems, but with the presence of I. Ortiz, Jr. in the saddle she’s worth including in a soft event. Her normally high-percentage trainer (S. Joseph, Jr.) is due to warm up; at last check he’s saddled one winner at the meet from more than 20 starters. Traffic Lane, third in a similar affair last month, has plenty of early speed, and if she can shake loose early she may get brave late. Toss her in somewhere.

Forecast: This second-level allowance extended sprint projects to have a very soft opening quarter and half. Who can take advantage of the projected race flow? Chocolate Bar, comfortably drawn outside, finished a willing third in a one-turn miler at this level over a sloppy track last time out in what was his first career outing on a surface other than grass. The M. Maker-trained colt certainly has a dirt pedigree (Cairo Prince x Include) and is consistently fast in the speed figure department, so maybe these conditions will suit him just fine. We’re expecting to see him within range of the leader (maybe even on the front end if he’s sent from the bell) and then have every chance when the pressure is turned on. Let’s make him a win play and rolling exotic single.

Forecast: Uncle’s Gem is a lightly-raced and progressive filly fresh from a nice maiden tally over this course and distance in her second career start and has upside most of the others in the field do not have. The late-developing 4-year-old daughter of Uncle Mo lands the good rail and projects to be on or near the lead, just as she was last month when beating a next out winner in good style while earning a solid figure. She’ll probably have to step forward to handle this tougher assignment but we’re expecting her to continue her improving pattern as she gains added experience. In a field lacking in effective closers, she appears capable of leading throughout as a win play and rolling exotic single.

Forecast: The finale is a grass grab bag for maiden $75,000 older claimers. There are many possibilities to consider; we’ll try to get by using just three. Semper Fidelis, away since last December and making just his third career start, showed promise in his brief juvenile campaign in maiden special weight company and returns going long on the lawn for a trainer that hits at a remarkable 29% with layoff runners, so we’re expecting this son of Fast Anna to fire a big shot fresh. He trained well enough at Palm Meadows before shipping north to make our Clocker’s “Primed and Ready” list, so in an open fray he’ll offer a good chance at a nice price. Another making his first start since last year is Amano, who shows the first-time gelding angle for C. Brown along with the class drop from maiden to maiden claimer. A strong threat if he returns as well as he left, the son of Temple City is solid in the speed figure department, drawn comfortably inside, and is reunited with I. Ortiz, Jr., who got good run out of him last year. Group Hug ran reasonably well when runner-up in his only prior outing on grass race earlier this year and shows speed figures that have risen in each of his most recent four starts since joining the M. Maker barn. With another forward move today, he’ll be right there.