The Official Betting Partner of Pimlico

The Official Betting Partner of Pimlico

Bet the races from Pimlico and more with Xpressbet! Bolster your XB Rewards bankroll by taking advantage of our lucrative XB Rewards Promotions for the biggest races.

Ready to bet Pimlico with Xpressbet?
Here’s what you need to know:

Pimlico is located in Baltimore, Maryland.

How old is Pimlico?

How long is Pimlico Race Course?

When does Pimlico race?

Pimlico has a boutique spring meet featuring the Preakness Stakes.

What races are run at Pimlico Race Course?

Pimlico is most famous for featuring the second Triple Crown race, the Preakness Stakes on the third Saturday in May. However, Pimlico also hosts the Black-Eyed Susan and the Pimlico Special.

Who are the most famous horses to run at Pimlico Race Course?

All 12 Triple Crown winners have raced at Pimlico, as the Preakness Stakes is the second race in the Triple Crown, but horses as well known as Man O’ War, Seabiscuit, Cigar, and more recently, Rachel Alexandra.

How do I bet on Pimlico?

Xpressbet is your way to play the races at Pimlico. Sign Up Now to Pick your Bonus and start betting today!

Bet Pimlico Online, on your Tablet or your Mobile Smartphone (iPhone or Android).

Xpressbet offers live video for every track we offer, including Pimlico Racecourse.

Pimlico Race Course is a thoroughbred horse racetrack in Baltimore, Maryland, most famous for hosting the Preakness Stakes. English settlers in the 1660s named the area in honor of Olde Ben Pimlico's Tavern in London, England. The racetrack is nicknamed "Old Hilltop" after a small rise in the infield that became a favorite gathering place for thoroughbred trainers and race enthusiasts. Due to problems in early movie and television recording of the races, the infield hill was removed in 1938.

Racing in Pimlico survived a 1910 anti-gambling movement that swept the country, prohibiting the sport everywhere, except in Maryland and Kentucky. Colonel Matt Winn of Churchill Downs is alleged to have credited Pimlico’s Billy Riggs as the savior of eastern racing at this time. It was Riggs’ use of the less-sinful “French Pools,” or pari-mutuel machines, in 1913 as opposed to the controversial bookmakers and their blackboards, that preserved racing at Pimlico during this turbulent time in racing. A new era was born at Pimlico, which later became the first racetrack in the country to utilize an electric starting gate.

The track has a one-mile dirt oval, surrounding a seven-furlong turf oval. There are stables for about 1,000 horses. Pimlico's capacity, including the infield, is over 120,000 people.

So no matter how you like to bet, Xpressbet is your way to play. Join us today to bet Pimlico – Sign Up Now to Pick Your Bonus and start wagering today!

New Customers - Sign Up with Xpressbet today and get a $125 Bonus!*
Use Promo Code 125PIMLICO. 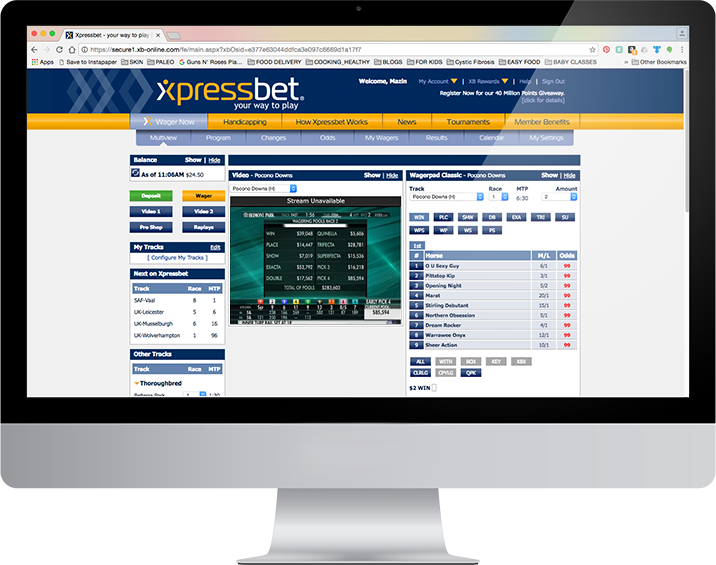 *Promotional offer valid beginning 10/1/2019 and continues until further notice. Open to new Xpressbet customers and lapsed DRF Bets account holders only. A lapsed DRF Bets account holder is defined as someone who has not wagered with DRF Bets in the last 13 months. Wagering credits will deposited in $25 increments for every $100 wagered within 30 calendar days of sign up. To qualify for full $125 wagering credit, new account holders must wager $500 within 30 calendar days of sign up. Wagers that are refunded or canceled will not be counted as eligible wagers. Promotional wagering credits will be deposited by Xpressbet within one business day of reaching each $25 increment. Wagering credits are different from cash and cannot be transferred, redeemed or withdrawn. Customer has 30 days to use wagering credits. Unused wagering credits will be retracted after 30 days. Must be 18 or older (21 in AL, AZ, IA, IN, KS, NH, ND, WA) to open an account with Xpressbet, LLC and reside in a state where such activity is legal. Void where prohibited. National Gambling Support Line 800.522.4700.