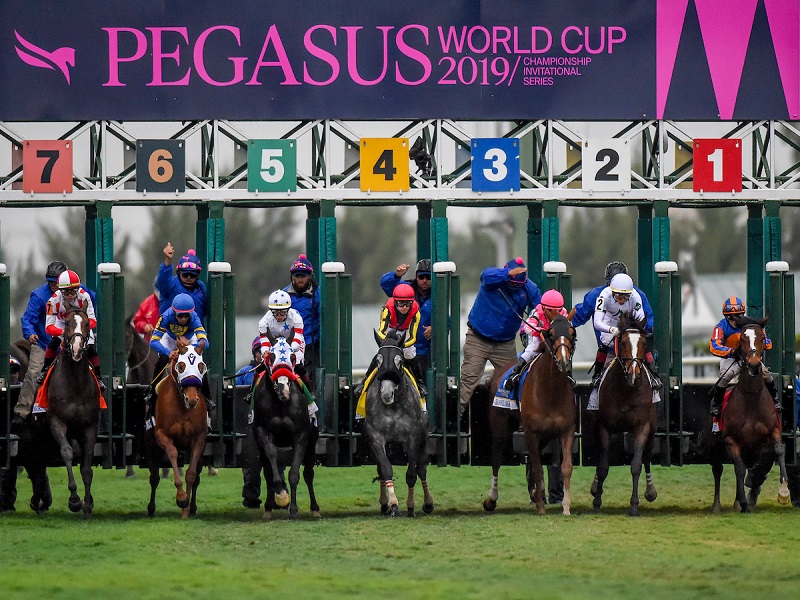 For the first time, both the Pegasus and Pegasus Turf will be run free of any medications on race day, heralding a new era in the sport of Thoroughbred racing in North America. The medication-free policy is consistent with the International Federation of Horse Racing Authorities (IFHA) standards.

During Wednesday’s post-position draw in Frankey’s Sports Bar at Gulfstream, Michael Tabor, Derrick Smith and Mrs. John Magnier’s Magic Wand was made the 7-2 top choice for the Pegasus Turf and drew the far outside post in a field of 12 that includes fellow Grade 1 winners Arklow, Henley’s Joy, Mo Forza, Next Shares, Sadler’s Joy and Without Parole as well as graded-stakes winners Channel Cat, Instilled Regard and Sacred Life.

Magic Wand had never faced males and raced only once in North America prior to last year’s Pegasus Turf, where she was sent off at 9-1 and ran second over a yielding course by 2 ¼ lengths behind Bricks and Mortar, who would go on to win his next five races, four of them Grade 1, making him the favorite to take home top honors during the 49th Eclipse Awards ceremony Thursday at Gulfstream.

Since the Pegasus Turf, Magic Wand has raced almost exclusively against males with one victory, becoming a Group 1 winner in the MacKinnon Stakes Nov. 9 at Flemington in Australia, just four days after finishing 10th in the Melbourne Cup (G1). In all, Magic Wand ran three times in two weeks Down Under, also running fourth in the Cox Plate (G1).

Following the MacKinnon, Magic Wand went to Sha Tin where she capped a busy 2019 campaign finishing second by a nose in the Hong Kong Cup (G1) Dec. 8. Though she went just 1-for-12 during the year, she earned nearly $3.5 million to push her career bankroll over $4.1 million.

The 2019 Pegasus Turf was Magic Wand’s only race at 1 3/16 miles, though she has never been worse than fourth with one win, six seconds and a third in nine tries at 1 ¼ miles. She is still seeking her first stateside win, having finished fourth in the 2018 Breeders’ Cup Filly & Mare Turf. Last year she was third in the Man o’ War (G1) at Belmont Park and second in the Arlington Million (G1), both by three-quarters of a length.

During his drought, the late-running 2017 Sword Dancer (G1) winner was second or third seven times, five of those by less than a length.

“He actually had a really good campaign last year. We were just really beaten necks and heads again,” Albertrani said. “His only big defeat was in the Bowling Green his first start back where he encountered quite a bit of traffic when he made his late run and still didn’t get beat that far [1 ¼ lengths].

“But he came back and put up two good races in the Sword Dancer and Joe Hirsch and came back and won the Red Smith impressively,” he added. “He’s absolutely strong, as strong as he’s been from what I can see from last year to now, so I’m anticipating another good season with him.”

Sadler’s Joy owns two wins and a second in four career tries at Gulfstream, taking the Pan American (G2) after losing the W. L. McKnight (G3) by a head in 2017. In 2018, he rallied to win the Mac Diarmida (G2) and was fourth in the Pan American. Overall, he has seven wins and nearly $2.5 million in purse earnings from 26 starts.

“It’s going to be a good, challenging race for us but I think he’s got the ability to get it done if he runs any one of his big races,” Albertrani said. “He’s got it in him. If he comes back and puts in one of those big efforts, I don’t see why he couldn’t get the job done.”

Mo Forza, bred and co-owned by Bardy Farm with OG Boss, brings a four-race win streak into the Pegasus Turf. From the barn of trainer Peter Miller, it will be the 4-year-old Uncle Mo colt’s first time racing outside of California.

“I’m very pleased with the horse,” Miller said. “He’s just really come into his own in the last few months. He’s a very sound, healthy horse and we’re really looking forward to Saturday.”

Unraced at 2, Mo Forza needed six tries to break his maiden but hasn’t lost since. He won the Twilight Derby (G2) and Hollywood Derby (G1), both at 1 1/8 miles, and Mathis Brothers Mile (G2) in succession to cap his 2019 campaign, and already owns a win over his elders, coming in his Sept. 29 graduation.

“He had been unlucky. He could have won a couple races before breaking his maiden, but he just had some bad luck. It’s just been maturation. He’s starting to figure the game out. I really can’t put a finger on it other than experience and maturity,” Miller said. “He’s the kind of horse you can put anywhere in the race. He’s won from up close and he’s won from pretty far back, so he’s very versatile. I think the distance should suit him well.”

“That day there wasn’t a lot of speed in the race, but the horse we thought would be on the lead that day was behind him,” Cox said. “He’s a little bit of a tricky horse to figure out where he’s going to place himself. I’ve seen him break and the rider content with where he’s sitting where he is and him taking the rider up into the race. Given that he’s 6 years old, we still haven’t figured him out. I just know he runs well.”

Bloom Racing Stable’s 4-year-old millionaire Henley’s Joy, another son of Kitten’s Joy, was beaten by Mo Forza in each of his final two starts of 2019 in California, capping a season where he had one win from 11 starts – the $1 million Belmont Derby (G1) going 1 ¼ miles on the grass.

“If you win one of those races every year, it’s a good year. He had some tough luck in a few races that might have went the other way if he got through, but that’s racing. He shows up every single time,” trainer Mike Maker said. “He’s a picture and he’s been working well here. It’s a tough task to ask him in his first start against 4-year-olds, but he’s earned it.”

Maker will also send out Michael Hui’s Zulu Alpha, a nine-time winner of more than $1.3 million in purses that has finished third or better in 18 of 30 lifetime starts. Two of his four graded-stakes wins have come at Gulfstream, in last winter’s McKnight and Mac Diarmida. The 7-year-old gelding was fourth, 1 ¾ lengths behind Bricks and Mortar, in the Breeders’ Cup Turf (G1).

Chad Brown, who won last year’s inaugural Pegasus Turf with Bricks and Mortar, will have three chances to defend his title led by OXO Equine’s Instilled Regard (10-1). The 5-year-old son of Arch was an impressive half-length winner of the 1 1/8-mile Fort Lauderdale (G2) Dec. 14 at Gulfstream in just his second start off a six-month layoff. Irad Ortiz Jr. has the call from Post 6.

Without Parole, second choice on the morning line at 4-1, will have the services of famed international jockey Frankie Dettori from Post 3, while Jose Ortiz rides Sacred Life (12-1) from Post 11.

Debby and Richard Baltas, Christopher Dunn, Jules and Michael Iavarone, Jerry McClanahan, Ritchie Robershaw and Mark Taylor’s Next Shares (30-1) joins Magic Wand as the only returnees from the inaugural Pegasus Turf, where he encountered trouble on the first turn and wound up seventh. The 2018 Shadwell Turf Mile (G1) winner went winless in five subsequent starts before ending 2019 with a victory in the Seabiscuit over Sacred Life. Jose Valdivia Jr. returns to ride from from Post 9.

Calumet Farm homebred Channel Cat, by turf champion English Channel, has been third or better in five of six career tries at Gulfstream, most recently running third by less than a length in the Fort Lauderdale. Front-running winner of the 1 3/8-mile Bowling Green last summer at Saratoga, he won the 1 5/16-mile Dueling Grounds Derby and 1 ½-mile Bald Eagle Derby in subsequent starts in 2018.

“We felt like we needed to see if he fit in a race like this, and I thought he ran a strong enough race last time to give it a try,” trainer Todd Pletcher said. “If you look at his PP lines, he’s run against the best American horses all year. My concern is that he’s really at his best at a mile and three-eighths or a mile and a half, but we’ll give it a shot.”

Hall of Famer John Velazquez has the mount on Channel Cat (10-1) from Post 5.

Completing the main body of the field is Amerman Racing homebred Admission Office (30-1), second by a half-length to Instilled Regard in the Fort Lauderdale. It was the fourth loss by the same margin in a graded-stakes for the 5-year-old Point of Entry horse, also running second in the Dixie (G2) and third in the Wise Dan (G2) and River City Handicap (G3) last year. Flavien Prat has the call from Post 7.

Jordan Wycoff’s Tusk, two-length winner of the one-mile Tropical Turf (G3) Jan. 11 at Gulfstream in his second start since being claimed by trainer Saffie Joseph Jr., is the lone also-eligible.